It's a story of unrequited love and visible internal organs, as Ninth Art revisits the punk sci-fi future of indie hero and modern maestro Paul Pope - and discovers that it's what's inside that counts.
19 June 2006 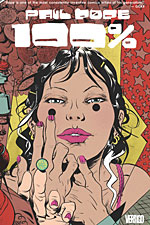 "I am searching the other's body, as if I wanted to see what was inside it, as if the mechanical cause of my desire were in the adverse body (I am like those children who take a clock apart in order to find out what time it is)." - Roland Barthes.

I wonder if Paul Pope has ever read Barthes' A LOVER'S DISCOURSE. Given his European influences and philosophical meanderings in the past, I'm sure he must have. At any rate, reading the above quote made me think immediately of Pope's 100%.

100% shares a world with Pope's earlier (and now sadly out-of-print) Vertigo book HEAVY LIQUID: New York in the early future. While HEAVY LIQUID had noir trappings with a surrealist aesthetic (hero on the run from Cubist-masked goons, G-men, troubles with girls and alien drugs), 100% plays it pretty much straight, as good ol' fashioned romance - or, more correctly, romances -- albeit with a few science fiction props.

The book also returns to a lot of the themes close to Pope's heart: love (requited and unrequited), sex, technology, and, as always, art - and while it isn't a strict sequel (although the trade paperback does have a neat little sort-of cameo from S, the protagonist from HEAVY LIQUID), it makes a nice companion piece to the earlier book.

Pope includes at least one romance in each of his major stories (with the exception of BATMAN YEAR 100 - perhaps one of the reasons it felt so unlike a work of Pope's is because all the usual themes were nowhere to be seen). There's HR's teenage crush on the Jiggler in THB; ESCAPO's unrequited love for the high-wire girl; Vim and Tubby in THE ONE TRICK RIP-OFF; and the past, doomed relationship that HEAVY LIQUID hinges on. 100% ups the stakes, presenting us with the lives of six characters, all connected through work and family and, this being a romance comic, love. The new, the old, and the casual varieties. 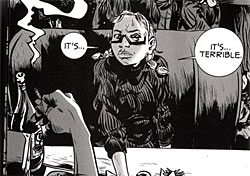 And Pope does this in a very interesting way, by immediately dropping the reader into a horrible situation: the first page shows us the leg of a girl, bare save for one shoe, poking up from a dumpster: "They found a dead girl in the alley last night, behind the club. You knew her, I think..." A crime, we discover, of love, and a crime that has an impact on one of the cast, Kim, a fairly naive bartender at the Catshack strip club.

From this act of unseen violence, we become introduced to the characters in very cinematic way - in keeping, somewhat. with Pope's claim that 100% is a "graphic movie" - from Kim and bar manager Strel talking about the dead girl, we're led down to busboy John (who is the closest thing to the usual Pope stand-in), and Daisy, the new Gastro stripper, and then, in a location change, to Strel's estranged husband, Haitous, a professional fighter, and, a few chapters later Strel's artist cousin, Eloy.

Now, there is romance, there is sex, but violence starts the whole thing off, and there's the threat of violence throughout the book (hell, Haitous is a boxer), but this is a book informed by living in post-September 11 New York. Pope even invokes the spectre of terrorism: "It's just more... terror," Kim says, referring to the dead girl.

Each of the romances in 100% shows different facets of a relationship: Strel, who didn't want to marry a fighter, but did, had his child and then left, and Haitous, who has finally reconnected with her, are at the end of their relationship - but maybe, just maybe there's a glimmer of hope; the fresh, sweet attraction between Kim and the hulking, sensitive Eloy; and John and Daisy's quick, complicated burst of passion. 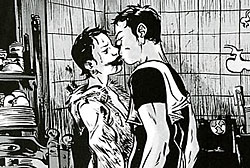 It's with these last two that Pope employs an obvious, but fitting, visual metaphor: the Gastro. Sex, Daisy tells us, became more than just looking at naked bodies. It went to all extremes: bestiality, faked snuff films, pay-per-view simulated cannibalism. "Then some charming gentleman asked himself 'What's it look like inside a woman?' 'What do her insides look like when she's getting off?' 'Bet that'd be a sight!' 'Bet that'd get the blood pumping.' 'Bet people would pay to see that.' A girl and her human meat." So, in clubs like the Catshack, the girls hook themselves up to MRI-Tek, and their insides are projected above them as they strip for the crowd. This is Gastro. (Gastro is also used, in perhaps even more macabre style, when fighters like Haitous go at it.)

The concept of Gastro are what reminded me of Barthes's writings on the corps, the division of the lover's body: only by studying the whole can you love, can you desire. And that's exactly what John wants to do, having shown an honest interest in Daisy, except she won't let him in, making her the most contradictory, and interesting, character in the book. John finds her diary, but doesn't even open it, and still Daisy doesn't want him looking at her insides, while she dances in front of complete strangers.

Pope shows us the many faces of love - discovering the foibles of a new lover, rediscovering why you fell in love in the first place, and, of course having your heart broken. It's about life then. Just like Daisy says: "It's all so simple. Eat, sleep, have sex, die... nothing to it."