Prepare yourself for something a bit novel, in every sense of the word, as author Martin Millar brings together the characters from three of his novels under the pen of Simon Fraser, in order to save the universe.
19 March 2004 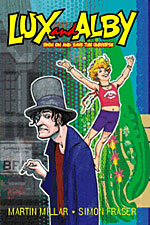 It's interesting when comics adapt a work of prose. With Etgar Keret's adaptation of his novella KNELLER'S HAPPY CAMPERS (as 'Pizzeria Kamikaze', with Assaf Hanuka in BIPOLAR), an already wonderful short story is given new life in the form of comics. Hanuka's visuals are a constant reminder that the characters are dead, with their various head wounds and fatal injuries. Like film, comics give the reader little nuances that prose doesn't allow.

Michael Chabon is releasing The Escapist into the world of comics, a paradox, considering the Escapist is already a comic book hero within a novel (Chabon's Pulitzer winning THE AMAZING ADVENTURERS OF KAVALIER AND CLAY). In KAVALIER AND CLAY, Chabon uses the language of comics, but it's still only words despite the vivid images his gorgeous prose invokes. So, of course, it's tailor-made for comics, as seen in the various incarnations in (takes a deep breath) MICHAEL CHABON PRESENTS: THE AMAZING ADVENTURES OF THE ESCAPIST.

But, not counting movie licences and tie-ins, I can't think of many comics that follow on from a story that existed as prose first. There have been plenty of adaptations, sure, like the recent Alan Moore books coming out from Avatar, a lot of Andrew Vachss's stories and Ian Miller's version of M John Harrison's THE LUCK IN THE HEAD, but apart from a few comics like Chabon's ESCAPIST and Epic's old NIGHTBREED and HELLRAISER line, nothing much springs to mind.

These properties lend themselves wonderfully to comics: again, it's all to do with visuals. I remember watching NIGHTBREED when I was kid, and thinking Peloquin was the coolest looking thing ever, and when I found out there were comics, I hunted them down. Harrison's baroque, shapeshifting world is violently, crudely depicted by Miller, while the ESCAPIST is a homage to the golden age of comics, wrapped up in good-humoured metafiction.

The characters of Martin Millar's assorted novels and short stories, however, do not come across as immediately adaptable to a visual form. They are the lowlifes and miscreants of Brixton. They don't have tentacle dreadlock things, or gaudy costumes with rippling muscles. Lux, Alby, Ruby and the rest of the gang from LUX AND ALBY SIGN ON AND SAVE THE UNIVERSE are normal folks (well, fairly normal folks). It's their humour and situations that lend themselves perfectly to comics.

LUX AND ALBY... follows the story of the title characters (and their friend Ruby) as they try and, well, the title says it all really, except they never actually do sign on to save the universe. As is typical with these guys, they just kind of fall into it. The graphic novel (or as Millar calls it "a fat comic") is a crossover, of sorts, as the characters have appeared in Millar's early novels, MILK, SULPHATE & ALBY STARVATION, LUX THE POET, and RUBY & THE STONE AGE DIET, but they've never met, until now.

Alby Starvation, "the most miserable paranoid in the history of the universe", with no luck in love, but a massive collection of rare SILVER SURFER comics, is living with his complete opposite, the amazingly attractive but utterly self-obsessed Lux the Poet. Lux, of course, is in love with himself, but also forever in love with Pearl, who is now going out with Nicky. Life for Alby is a constant struggle, be it with love or welfare cheques, while Lux just wanders through life, getting by on his looks and poetry, and bedding Pearl substitutes.

When Ruby comes into their lives, having just broken up with her boyfriend, she hatches a plan to get revenge. She moves in with Lux and Alby. Below them, in the cellar, are the followers of Ishtar, chanting to her idol. Above them lives Iskar, the "greatest exponent of the I-Ching in the world", who is able to predict any event. And then there's Menta, who lives in Nirvana, and has been given the task of becoming the best kisser in the universe. Luckily, Lux has just stumbled onto the Art of Zen Kissing. 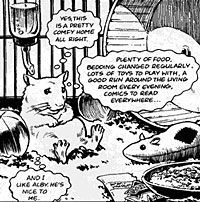 Unfortunately, Ruby isn't the only one planning revenge. Iskar has his sights set on Nirvana...

It all sounds very hodge-podge, but it works. Combining the weird mystic/fantasy elements of goddesses, not to mention the secret life of plants and rocks, with the hardness of living on the streets of Brixton, surviving hand-to-mouth, and, in the case of some of the characters, dealing with heroin addiction, is something Millar accomplishes with ease. Interrupting the story every now and then with "A Day in the Country with (each of the main characters)", Millar really gets to express himself, as a wonderful day slowly dissolves into something that's really not so wonderful.

While it's technically not Millar's first foray into the world of comics (he penned the novelisation of the TANK GIRL movie, available free on his website, with a near-venomous introduction), the form perfectly fits his style of writing, with his trademark quick, abrupt shifts between scenes and characters handled well by 2000AD regular Simon Fraser.

Fraser's art is perfectly suited to the characters. He gives the downtrodden Alby the best facial expressions - cartoony, slightly over the top, but human and believable. His Lux is suitably hermaphroditic, which was something of a surprise, as I never pictured him as overtly feminine. Fraser easily controls the shifts between time and place, from the Brixton squats, to the other dimensions visited by Menta.

If there is one major flaw in the book, it's the last chapter, where Fraser's art takes a massive departure from the style used throughout the book, baring some resemblance to Cynthia Martin's work on the old STAR WARS comics. I have no idea why this happened, and it interrupts the flow of the narrative at a crucial point in the story.

That said, LUX AND ALBY SIGN ON AND SAVE THE UNIVERSE is a small gem, and is worth tracking down, especially if you're a fan of quirky, human stories.