Picture narratives may predate prose, but novels still get the respect. Ben Wooller looks at the new prose publishing initiatives from Marvel and Dark Horse, and explores the world of Michael Chabon's THE ESCAPIST.
14 June 2004

Prose novels are the younger, more respectable brother of comics, if you accept that comics really came first, what with pre-Columbian picture screenfolds and the Bayeux Tapestry. Yet novels have all the distinguished awards, and the much higher profile, and before the days of Harry Potter nobody ever put much importance on the fact that novels were also a children's medium.

Comics are the opposite. No matter what kind of attention they get, the same clichÃ© will always be repeated; comics are for kids - except for those that aren't.

Which partially explains why comics, the older brother in the narrative family, are the black sheep. Comics exist in that strange twilight world: supposedly kiddie-orientated, still breeding grown-men-in-tights within a rigid, change-fearing framework, all the while subverting fiction and occasionally influencing other members of the narrative family, such as filmmakers like the Wachowskis and Quentin Tarantino, and novelists such as Michael Chabon and Jonathan Lethem.

In fact, a lot of the current crop of 'hot young' writers, Chabon and Lethem included, unashamedly admit to having read comics as kids, and the recent comics edition of literary journal McSweeney's further illustrates the relationship between modern prose literature and comics.

A NOT SO LITTLE, NOT SO NEW THING

Recently, both Dark Horse and Marvel announced plans to launch lines of prose books. These aren't that alien in the world of comics; there have been Marvel superhero novels, usually featuring the X-MEN, and DC had some BATMAN related anthologies a while ago, while most of their big events (DEATH OF SUPERMAN, KINGDOM COME) have been novelised. (Greg Rucka even adapted NO MAN'S LAND.) Comic publishers have even published their own 'prose books' before; Top Shelf resurrected Alan Moore's novel THE VOICE OF THE FIRE earlier this year, Dark Horse has published illustrated novels and short story collections, and IDW has published books like the CAL McDONALD novels.

'The Continuity Police are already questioning the books' place in the Marvel Universe.' Marvel's line, of course, will feature Marvel properties. While the press release promises the primary function of the new line is to "create great fiction", the blaring title of the release, "Initiative Expands Upon Publishing Division's Success In Graphic Novel Market And All-Time High Awareness Of Marvel Characters" (emphasis mine), suggests otherwise.

I can see Marvel wanting to cash in on the Harry Potter craze: young adult fiction is big bucks these days, but just to be sure, Marvel is covering every base. A sequel to the "critically acclaimed young adult novel" MARY JANE is planned, followed by a middle grade SPIDER-MAN novel, and a "fantasy" WOLVERINE novel for adults.

I can really only see this being successful with the help of the diehard fans who want to grab every WOLVERINE appearance. The Continuity Police have already started to question the books' place in the official Marvel Universe. I wish Marvel all the best, though. After all, if the print adventures of SPIDER-MAN get more kids reading, as Harry Potter apparently has, instead of sitting in front of the PlayStation, then it's all good. I can only wonder what Harold Bloom will make of it, and wonder where the "good fiction" comes into it.

For Dark Horse, the move into prose publishing is just a natural evolution. As mentioned before, Dark Horse has published illustrated novels before, including two HELLBOY novels, an anthology, and a GRENDEL tie-in (again by the prolific Rucka), as well as comic adaptations (and expansions) of popular film properties.

Dark Horse is launching two imprints. The first, M Press, will focus on prose storytelling, with no men-in-tights in sight. The debut book, SHANGHAI DIARY by Ursula Bacon, tells of how the author fled Nazi Germany with her parents 1939 and ended up in Shanghai. The second imprint, DH Press, will be a non-fiction line focusing on pop culture. With the HELLBOY and SIN CITY films, Dark Horse's profile will no doubt continue to rise, and DH Press is continuing the movie trend with two cinema-related works among it's initial releases; DON BLUTH'S ART OF STORYBOARD and KONG: SKULL ISLAND. The third book has definitely got my attention: PINUP: THE ILLEGITIMATE ART.

The first volume of MICHAEL CHABON PRESENTS THE AMAZING ADVENTURES OF THE ESCAPIST passed me by. The first issue was late and quite expensive for 80 pages, and once I'd missed that, I decided to skip the second issue. But being a Michael Chabon fan, I couldn't pass up the chance to grab the collected edition. Dark Horse, again crossing the literature lines, has produced a smart looking book: just check out at the beautifully minimal Chris Ware cover. 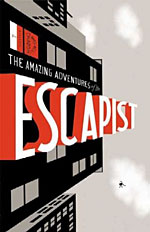 In Chabon's novel THE AMAZING ADVENTURES OF KAVALIER & CLAY, a fictional account of the lives of two early comic creators, the birth of the Escapist (inspired by Houdini and artist Joe Kavalier's own experiences) is sudden, sketched out verbally by Sammy Clay and on paper by Kavalier, "a lithe, acrobatic man who had just leaped into his mind". The next chapter tells the "secret origin" of the Escapist in Chabon's vivid, visually dense prose.

That origin is the first story in this collection, and in keeping with the conventions of superheroes, Chabon only offers a few brief descriptions of place, and scant characterisation, letting Eric Wight's art do the bulk of the work. Unfortunatley Wight's art, while impressive, is too modern, for the 1940s of the Escapist.

Of course, if we immerse ourselves into Chabon's metafictional world, a world where the "legendary" work of Kavalier and Clay is made real (something that is nicely touched upon with footnotes in the novel but hammered home here), then this is quite possibly an adaptation of the "classic" work... But truth be told, the metafictional aspect of the Escapist is the one major, annoying, drawback when it comes to the Escapist as a real comic.

The thing is, in THE AMAZING ADVENTURES OF KAVALIER & CLAY, the Escapist is the metaphor that ties everything together. He represents Kavalier running from his past, but never escaping it, and Clay trying to deal with his homosexuality. The AMAZING ADVENTURES OF THE ESCAPIST presents stories of the Escapist throughout the rocky history of the publishers, and revamps of the character, but it reveals that the Escapist as a character just isn't that interesting. It's his genesis in the novel that's so compelling.

'The metafictional aspect of the Escapist is the one major drawback.' The comics do work well as pastiches of the various eras, though. Kyle Baker's Escapist from the 1950s is a comical precursor to the goofy Batman of the 60s (of course, I didn't know Baker was that old...), and a Howard Chaykin revamp from the 70s was surely a given, while a cosmic Jim Starlin Luna Moth story from the same period is a nice touch.

Actually, the three Luna Moth stories are the highlights of the collection, with art by Bill Sienkiewicz, the aforementioned Starlin, and Dan Brereton. The two Escapist stories that stand out, for me, are the manga Escapist, which changes the idea of escapism into a supernaturally driven agenda while tying in politically charged themes from the period, and the, controversial "lost" issue from 1976, "The Tiger or the Lady", by novelist Glen David Gold with art by true legend Gene Colan. It's a moody and effective story that feels authentic and actually makes you wish there was an ESCAPIST comic, just to find out what happens next.

While Chabon writing a comic (well, one story, even then adapted from his own work) did make small headlines in the both the literary and comic worlds, it didn't seem to be an event on the same scale as geek icons like Joss Whedon or Kevin Smith writing in the field. No one batted an eyelid at Glen David Gold writing a piece in the ESCAPIST, and THE BEACH author Alex Garland's BATMAN back-up faded away into obscurity.

Maybe it has something to do with the assumed elitism of novelists, or maybe it's that these authors just don't feel like 'one of us' in the same way as those movie and TV 'celebrity' writers.