Ben Wooller looks at Geoff Klock's attempts to skirt around the term 'post-modern' in his exploration of comics' 'third movement', HOW TO READ SUPERHERO COMICS AND WHY. Plus, why Superman is bad for your social conscience.
06 December 2004

I read Geoff Klock's HOW TO READ SUPERHERO COMICS AND WHY (Continuum Books, 2002) lying on a motel bed in small town Australia. It was better in the room: the main bar, bristling with shearers and pig farmers, didn't seem like the place to read comics, let alone a quasi-academic book about comics. Books didn't seem to exist in the town - a second-hand bookshop opened a while after, only to close a few months later - and I didn't really want to explain to the locals, strangers at that point, what I was reading.

"Well, it's a look at the third movement of comics, using Harold Bloom's 'Anxiety of Influence', and Lacanian psychoanalytical theories as a mirror to reflect the concerns and themes that all these comics explore. Warren Ellis came up with that term: the third movement. You guys all know Ellis's work, right? Guys? Hey, you can put down the pool cue..."

Besides, Jacques Lacan, that rogue French psychoanalyst, is hard to understand on a good day. 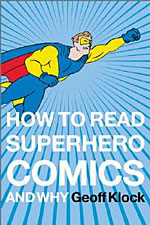 That said, HOW TO READ SUPERHERO COMICS AND WHY isn't that difficult to understand. I'm probably being unfair to the good people of that small wheatbelt town, even if on our last night there, a drunken, stinking mulleted cretin with missing teeth sexually harassed my fiancÃ©e and I nearly got my face smashed in. But that's neither here nor there. It's not like I wished some superhero would swoop down and rescue us, because I didn't. That'd be stupid.

So, I stayed in the room those first few days, reading a critical study of recent superhero comics, in which the key phrase is revisionary superhero narrative (and usually in italics, too). It's a phrase that most people are sick of, but it's the most apt description, specially as Klock's most expansive deconstruction of superheroes is focused on the two most famous comics to ever be called revisionary superhero narratives: THE DARK KNIGHT RETURNS and WATCHMEN.

Apart from Scott McCloud's UNDERSTANDING COMICS, I hadn't read any 'comics as literary theory' books before. Douglas Rushkoff mentioned comics briefly in CHILDREN OF CHAOS, but his treatment was clumsy. He introduces the specific metaphor of the Marvel Universe as a way to explain how children - his term is "screenagers" - are abandoning "the linearly consistent world" in order to "achieve a greater continuity on another level". While his argument is sound (especially when it comes to the juggling of different continuities, also a key point in Klock's book), Rushkoff muddles things by mentioning Superman and Swamp Thing in the same breath as the "Marvel Universe". Surely screenagers would instantly see the aberration?

Klock's text is easy to follow, which is why I called it 'quasi-academic'. He starts by laying out his argument, which is to "present a different paradigm for recognising the 'third movement' of superhero comic books, and to avoid at all costs the temptation to refer to this movement as 'post-modern', 'deconstructionist', or something equally as tedious". Those two descriptions, of course, are still perfectly valid, albeit done to death, which why Klock's take is a refreshing one.

'Klock's deconstruction is focused on DARK KNIGHT and WATCHMEN.' He then gives a brief rundown on some classic examples of psychoanalysts, your Freuds, Jungs and Levi-Strausses, and a brief example of comics and psychoanalysis, specifically THE MAXX, where Sam Kieth, with his dreamworlds and rabbits, obviously knew his Jung and Levi-Strauss. Introducing the psychoanalysts allows the introduction of Jacques Lacan and Lacanian theorist Slavoj Zizek, as well as easing the reader into Harold Bloom's 'Anxiety of Influence', and his terms 'influence' (the matrix of relationships fiction shares), 'misreading' and 'misprision' (both acts of interpretation that create new texts from the old). Klock also uses comics that are readily available in collected forms, a nice twist on traditional subjects of critical/literary theory being readily available, which is a misprision in itself as texts central to a lot of literary theory studies are constantly recycled (Shakespeare for example).

The central comic trope running through HOW TO READ SUPERHERO COMICS AND WHY is continuity. The first chapter, playfully numbered '0' focuses on CRISIS ON INFINITE EARTHS, and how DC's effort at simplifying chaos failed, but turned out to be "upon closer inspection, one of the genre's unique strengths".

The first comics Klock tackles are the two key, overly celebrated revisionist superhero narratives, THE DARK KNIGHT RETURNS and WATCHMEN. While these two titles have been done to death when it comes to deconstruction, they have influenced the recent comic landscape to such a degree that they still deserve attention. Klock pairs the texts with two other books by Frank Miller and Alan Moore: BATMAN: YEAR ONE, and THE KILLING JOKE, respectively.

This works well, as he finds the threads that link all four books. DARK KNIGHT RETURNS and BATMAN: YEAR ONE are the beginning and the end of Batman, without, as we've come to see, not really finishing anything at all. WATCHMEN and THE KILLING JOKE are both attempts "to make sense of superhero history in all it's varied aspects rather than synthesize the history of a single character", as well as Moore's playing with continuity in THE KILLING JOKE where there is a 'Bat-family' photo with characters who, due to CRISIS, no longer exist.

Klock works his way through titles as diverse as MARVELS and Moore's ABC line, down to Ellis's 'Third Movement', revelling in Grant Morrison's JLA with its "casual self-consciousness" (knowing its own epic continuity, and commenting on how much it has changed, eg girlfriends in fridges as opposed to "jewel heists and dumb traps"), and THE AUTHORITY (continuity is the "consensus reality" that kills Jenny Sparks a year early, with the "fish-head" majority worrying about what came before, and making sure everything adds up).

'Klock works his way through titles as diverse as MARVELS, the ABC line and JLA.' This all culminates in PLANETARY's Snowflake, which, as Ellis originally states, is "the shape of reality ... the multiverse". Klock states that PLANETARY is "the apex towards which this book has developed", but ultimately anyone who reads the comic already knows what Klock is writing about, despite the academic trappings.

Unfortunately, this is true for a lot of the comics featured within the book. I'd agree with Joe Casey's glowing blurb, "A book like this is way overdue", but perhaps only in an academic capacity. It is a welcome addition to the growing library of comic theory books, but behind the academic language, I couldn't help but feel that I already knew a lot of Klock's arguments from reading the comics themselves, though he writes well, and he certainly knows his stuff (and reads the right books).

Klock's use of the psychoanalytical theory is a novel way of looking at superheroes (and it looks like it may be continued with Danny Fingeroth's SUPERMAN ON THE COUCH). The lack of illustrations to the text, I assume due to copyright issues, is a small hiccup. Klock has to make up for this by describing scenes and panels, which occasionally detracts from the flow of his arguments. It's also interesting to note, when it's all laid out, how much impact the 'British invasion' has had on American comics (Moore, Morrison and Ellis feature more frequently than any other writers).

Klock ties everything up nicely, with a small look at "pop comics" (which, sadly, like the era of comics like AUTHORITY, seem to have passed us by), for future scholars to observe and examine. An all-too brief FAQ section, with a skim over M Night Shyamalan's UNBREAKABLE (a "teasing out of one of its thematic strands"), and an extensive "further reading" section, introducing notable examples of non-superhero comics (including AKIRA, FROM HELL and a lot of Vertigo comics) only hints at what Klock could've explored had he not focused solely on the most visible comic book genre.

On the whole though, HOW TO READ SUPERHERO COMICS AND WHY deserves to stand alongside Eisner's SEQUENTIAL ART, Scott McCloud's UNDERSTANDING COMICS and Richard Reynold's SUPERHEROES: A MODERN MYTHOLOGY on the bookshelves of comic readers.

Superman is, apparently, a bad role model. In a world of supervillains and antiheroes, you'd think he'd be a bloody paragon, wouldn't you? According to research published in the Journal of Experimental Social Psychology (and publicised byNew Scientist), fans of Superman unconsciously compare themselves to the Boy Scout, and as a result of realising they can't measure up, are less likely to help others I'm sure it's more to do with moralist and ethical reasons, as opposed to the lack of coming from another planet and being blessed with awesome powers.

The discovery was made while examining how people's decision making can be influenced by "surreptitiously placed ideas". The researchers, Lief Nelson (NYU) and Michael Norton (MIT) asked students to list the characteristics of Superman, or other superheroes, as part of a larger questionnaire. Later, students were offered the chance to volunteer for a fictitious community program.

The research showed that those students who thought of Superman volunteered much less of their time than those who thought of other superheroes. Nelson said the reason was that "asking people to compare themselves to an exceptional individual makes them realise their shortcomings". Thinking about a general category, however, encouraged people to identify the strengths they had in common.

It doesn't state if the general category included superhero teams, mutant angst, or sociopathic totemic vigilantes who witnessed their parents being killed.