Good comics that attempt to recreate real history are few and far between, but Chester Brown attempted it with his life of Canadian rebel Louis Riel - and the result is a qualified success.
04 April 2005 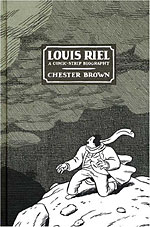 With a flood of new comics hitting the shelves of our friendly local comic emporium every week, it's easy to forget the simple fact that a lot of hard work goes into making each and every comic published. Good, bad and indifferent, they all require massive effort to actually get into print.

With their greater length, even more work goes into the average graphic novel. But even this substantial workload is smaller than that required by quality historically based graphic novels. Whether dealing with fact or fiction - and we are currently stuck with the term graphic novel to cover both fact and fiction long-form comics - well-researched books set in any historical period require the creators to invest a great deal more time and effort before they can even begin to set pencil to paper.

With all this extra work, it is perhaps not surprising that there are so few graphic novels that take place in a specific historical setting, and fewer still that are well researched. Thankfully though, Chester Brown has put the considerable effort necessary for such as feat into LOUIS RIEL, a historical biography of the Canadian rebel and statesman.

Few outside of Canada are perhaps even aware of who Riel was, or his achievements, but I'm hopefully not spoiling anyone's enjoyment by saying here that Riel was a member of the MÃ©tis, people of mixed European and Indian heritage. The MÃ©tis lived on land claimed by the Hudson Bay Company, outside of the borders of the newly formed dominion of Canada. At the time, Canada was keen to expand its borders westwards, bringing it into conflict with the MÃ©tis.

As it says on the cover, this is a 'comic-strip biography', and as such it is a very different animal to standard text biographies, which typically cover their subject's whole life from birth to death. In comics, space is at more of a premium, forcing the author to pare down the key points of their subject's life, literally choosing what to illustrate. 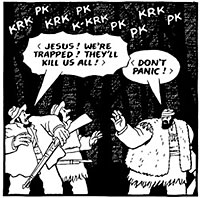 In LOUIS RIEL, Brown has chosen to focus on his subject's involvement in the MÃ©tis rebellions against the Canadian government. This focus on these events lends the book a quality perhaps more akin to a TV dramatisation. But if it is less exhaustive, this biography of Louis Riel is also sleeker and more engaging because of its focus.

We first meet our title character in the Metis's Red River Settlement, where he has recently returned to run the family farm. Far from portraying him as an everyman, Brown swiftly reveals Riel to be a complex character, as he finds himself facing overwhelming pressure from within his own community and threats to his life from the Canadian government while he seeks to safeguard the rights of his people.

Perhaps the most interesting aspect of Riel's tale is that, as a result of this pressure, he suffers from a period of mental illness. From this illness follows a religious conversion that culminates with him developing the conviction that he had become 'David', God's prophet in the new world.

As in his previous work, MY MOTHER THE SCHIZOPHRENIC, Brown does not shy away from the subject of mental illness, and portrays its influence on the rebel leader's thoughts and decisions to excellent effect. While it is impossible to credit Brown with creating the facts of Riel's life, his skill shines in his ability to communicate them effectively.

Brown's rendition of both Riel and Canadian Prime Minister John MacDonald both bear fittingly strong resemblance to the historical persons they represent, and the depth of Brown's research is evident throughout. The style of his art also marks something of a departure for Brown, as he acknowledges the influence of LITTLE ORPHAN ANNIE cartoonist, Harold Gray. 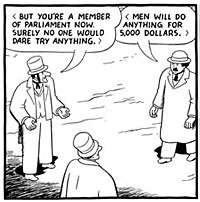 However, if Brown's work owes any major debt, it is to history itself, and it is a debt the author is keen to pay off in full. Following the example set by Alan Moore with his extensive annotations in FROM HELL, Brown goes to great pains to show where he got his references from. To this end, he includes not just annotations, but a bibliography and index sections as well. These sections highlight areas that Brown says he has had to simplify things to fit the confines of a graphic novel. These sections add the weight and authority of history, and it is this as much as the accessibility of the comic that will make the book worth studying in years to come.

Unfortunately, Brown's scrupulously honest and earnest attempt to stay as close to the established facts of Riel's life as possible has a further side effect. It sacrifices most of the drama that exists in the events, leaving the narrative quite dry as a result. The characters appear to have no interior lives, no hopes or dreams outside those that are sanctioned by the historical record of their actions. This is a real shame, because it could add significant depth to what is already a compelling story.

The problem of a lack of drama is compounded by Brown's decision to employ a strict 2x3 six-panel grid, which unfortunately flattens both the emotional impact of the events it portrays, and the overall pace of the narrative. Seconds, weeks and months elapse in the same physical space.

Although a softcover edition is planned, Louis Riel is currently only available in a hardcover format. Happily enough, the fantastically high production values on the hardcover are well worth the cover price. The quality paper used in particular adds to the overall package, making it a beautiful artefact in itself.

A lot of hard work went into this book, and it shows on every page. It might not be as full of engaging three-dimensional characters as it could have been, but it does render the life and struggles of an important, if often overlooked, historical figure into a finely crafted and accessible book - a book that's a worthwhile read without being too worthy.