Remember the 90s? The Space Fleet, the food shortages, the alien Treen? Ninth Art revisits Frank Hampson's vision of the future - as seen from the 1950s - in one of the greatest sci-fi series of all time, DAN DARE.
27 June 2005 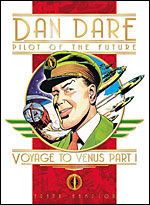 In the wake of the success of comics such as MAUS, WATCHMEN and THE DARK KNIGHT RETURNS in the late 1980s, the early and mid-90s saw a boom in publishers of all stripes rushing to grab a piece of the newly emerging graphic novels market.

As we all now know, the immediate emergence of that market failed to occur. Instead, in the UK at least, the boom merely led to a steady trickle of graphic novels arriving in the remaindered sections of bookshops. Remaindered books are never a good thing for publishers; they represent a significant loss on the publisher's investment in printing the books in the first place. It seemed that the market to sustain the glut of graphic novels of all manner and description hadn't quite materialized.

This was a real shame for the publishers and creators concerned, for amongst the glut were some fantastic high-quality books that would, in time, find their audiences. It was less of a shame for me, then a poor and lowly student, who picked up great books at bargain prices (including a first edition of Neil Gaiman and Dave McKean's first graphic novel collaboration).

In the midst of the glut, Hawk Books published lavishly produced reprint volumes of Dan Dare's adventures from THE EAGLE, possibly one of the finest crafted comics Britain has ever produced. To my eternal shame these were bargains that I passed up - my aesthetic taste was so impoverished that I was not able to fully appreciate the quality of the lavish and detailed artwork Frank Hampson, and later Frank Bellamy produced for the comic. Their styles were just too different from the American comics that I had grown accustomed to. The panels were tiny and appeared to lack the overwrought dynamism of American comics; where were the splash pages of people hitting each other?

Fortunately for me, my tastes diversified and improved with age, and with Titan's release of new collections of Dan Dare's adventures, I have been afforded a second opportunity to properly appreciate just how good those first Dan Dare strips were, how bold and how well researched.

For the uninitiated, Dan Dare was the lead strip in a weekly anthology comic called THE EAGLE, first published in 1950. As the tag line explained, Dan Dare was 'the pilot of the future'. He worked for the United Nations Space Fleet, a suspiciously British-dominated operation with a few token pilots of different nationalities. It was set in the then impossibly far flung future of the 1990s. Earth's population was facing a food crisis; not enough fresh produce to go round, and artificial foodstuffs were inadequate to feed the rest of the population. The task before Space Fleet was simple; find somewhere capable of growing enough food to feed the citizens of earth.

Perhaps surprisingly to modern readers, the main hope for the Earth's bread basket in these stories was Venus, but it must be remembered that in 1950, when the stories contained in VOYAGE TO VENUS were first published, little was known about Venus. Humanity had not yet embarked upon the space race. No probes had been sent into space; it was to be over a decade before the first man went into orbit and even longer before the first probe landed on Venus.

Spanning 77 weeks in its original run, the first epic Dan Dare storyline has been split into two volumes in these new Titan editions. This is quite annoying; it's not like there would have been any problem with fitting the story into a single binding, and it increases the cost. Fortunately, this format doesn't detract from the quality of the strips themselves, and they are well worth the cost of admission.

Indeed, while it might be unsatisfying to leave the story uncompleted at the end of the first volume, the first book still contains most of the building blocks of the Dan Dare mythos that was to be exploited in later stories. Most importantly, VOYAGE TO VENUS volume one features Dare's first meeting with the Mekon, the leader of the reptilian Treens. A villainous, egg-headed, super-scientist, the Mekon was to be Dare's arch-nemesis and most important foe.

Despite being set in the 1990s, VOYAGE TO VENUS is definitely a product of its time, as evidenced by a plot centred on food shortages similar to those afflicting post-World War II Britain. Likewise, at a time when the world was realising the horror of ethnic discrimination and ethnic cleansing, Hampson was careful not to demonise an entire Treen race in his portrayal. He was also careful to include Sondar, a virtuous Treen who displays strong emotion of the kind forbidden by the Mekon. Another sign of the times is Sir Hubert's outraged and outrageous reaction to Professor Peabody, who has the audacity to be - gasp! - a woman, and an intelligent, proactive and attractive woman at that. 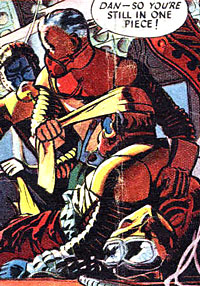 But outside of some dated references, the quality of the work still stands up today. The amount of scientific detail and narrative the creators were able to cram into each panel of each one and three-quarter page weekly episode seems even more amazing today and puts most modern comic creators to shame.

The flora and fauna of Venus is detailed and consistent, all the ships are fully realised, and were often drawn from purpose-built scale models. Moreover, the narrative is extremely engaging - every page is constructed to ensure you feel compelled to turn the page immediately to find out what happens next. Just imagine the poor kids who had to wait a whole week for a new episode. Hampson even managed to shoehorn a Christmas theme (complete with holly wreaths decorating select panels) into the middle of a storyline without making it appear overly obtrusive.

As you would expect from a comic that boasted noted scientist and science fiction writer Arthur C Clarke as its scientific adviser (on the first issue at least), there was a serious scientific basis for much of what is portrayed in the book. The principles of pressurized air travel are broached and explained in one panel while an alternative means of rocket propulsion to solid and liquid fuel boosters is explored and explained in another.

In a present-day world, where such ideas are still yet to be fully developed by modern scientists, VOYAGE TO VENUS remains ahead of the times, more than 50 years after it was first published. Given its blue-skies thinking and the fact that it was written before the space age had really begun, we can perhaps forgive the occasions where credulity and credibility is stretched with plot devices such as the 'impenetrable' equatorial fire barrier that Dare manages to cross seemingly by accident.

Reinvented repeatedly over the years by various comic creators, including Dave Gibbons and Grant Morrison, Dare has most recently become a computer generated animation series. It would seem that the appeal of the pilot of the future will endure and the new edition of VOYAGE TO VENUS does an admirable job of exposing a new generation of readers to his comic strip origins. Even after half a century, the pilot of the future is still well worth discovering.