Continuing Ninth Art's tour through some of the comic industry's most diverse talents, we turn to the creator of multimedia icon MODESTY BLAISE, the man who remade BATMAN, and the imagination that unleashed AKIRA.
20 February 2006 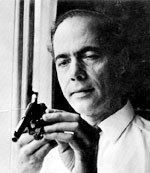 Todd McFarlane, eat your heart out. Sure, you've turned your big-caped creature of the night into a movie, a cartoon series, a toy line and, no doubt, boxer shorts and Easter eggs, but you're not the first man to take a comics character he created and spin them off into a multimedia empire. For that, we have to look to the UK, and to Peter O'Donnell.

O'Donnell began writing when he was sixteen years old, but a stint in the army over World War II took him away from his vocation for a while. Nevertheless, once demobbed he was straight back in the saddle, scripting newspaper comic strips such as the Daily Express's adaptation of the James Bond book DR NO. It was a while before he lit upon the character who would in later years become synonymous with his name, but it's not hard to see that writing comic strips based around espionage and derring-do featuring Ian Fleming's famous super-spy gave O'Donnell an itch to write more in a similar vein.

He got his chance to do just that in 1963 when he created Modesty Blaise, a female character in her late 20s who went around the world having what can only be described as 'thumping good adventures'. Blaise and her right hand man Willie Garvin took on a variety of bonkers villains and political machinations, and while there may have been a few broken skulls before bedtime, they were generally back home in time for cocoa.

The series ran until 2001, when O'Donnell retired the character. The strips themselves (currently part of an ambitious reprint programme by Titan) were only one aspect of the character's media presence, though. Modesty Blaise has been the subject of three filmed versions, in 1966, 1982 and 2003 respectively. Unfortunately, none of these were actually what you would call any good, and O'Donnell has officially put a moratorium on further versions by saying that he will not consent to any future movie that is proposed to him - a bit of a shame, considering that Quentin Tarantino has frequently mentioned that he'd love to make a Blaise flick.

The 1966 movie was adapted into a novel by O'Donnell himself, and due to the vagaries of the filmmaking process he was able to get the book out a full year before the film was released. Unlike the film, it was well received, and O'Donnell wrote a further ten novels and two short story collections featuring the character.

One writer, one character, 38 years, three films, 13 books, countless strips. It's not too shabby.

Who created Batman? Oh, I know, I'm just playing with you. We all know it was Bob Kane and Bill Finger, or just Bob Kane if the icy hand of revisionism is allowed to have its way. It's a fair bet that the Batman created by these gents back in 1939 isn't the same Batman that you've been reading about recently, though, unless you've had your nose buried in old Archives volumes of late. The Batman you've been reading about was formed out of the silly putty of the giant penny era in the 1970s by writer (and later editor) Denny O'Neil.

O'Neil had been working in comics since the 1960s, taking the reins of DOCTOR STRANGE for a six-issue stint when it all became a little too hectic for Stan Lee and Roy Thomas, but it was at DC that he was first really allowed to shine. The 1960s had not been a dignified time for Batman, with the stamp of the self-parodying TV show indelibly imprinted on the character - or so it seemed. O'Neil chose to look back at the original stories, however, and what he saw there was a determined, driven, serious man whose main motivation was to get the job done - hardly the characteristics that come to mind when considering the Adam West small-screen campathon.

Working with Neal Adams, O'Neil set about returning the character to his more intense roots. Together they introduced villains like Ra's al Ghul and began systematically dismantling the ridiculous shell of pop culture detritus that had built up around Batman like a bad-taste katamari. They made the character into an evolved version of the Kane/Finger version, and gave comics some top-notch stories into the bargain.

Adams and O'Neil also brought politics and social awareness into superhero comics in a major way with their run on GREEN LANTERN/GREEN ARROW. After tackling issues such as racism and drug addiction (the irony of the sidekick who was hopped up on goofballs also being called 'Speedy' is perhaps more amusing than it should be), their time on the book was cut short when DC cancelled it out from underneath them. A few years later, O'Neil and Mike Grell were given the opportunity to relaunch the title, but their remit didn't extend to social relevance this time round, and the book was largely a damp squib.

There's much more to O'Neil than these two titles, of course. Most notably, he was editor of the Batman titles for a good long time. He's still working in comics, and shows no signs of wanting to quit. 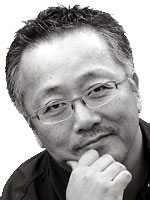 The best ambassador for winning over people who "just can't get into that manga stuff", Katsuhiro Otomo is a creator on a par with Jack Kirby and Jean Giraud, and can legitimately be said to have a claim to the title of 'most significant manga creator ever' (although folks like Osamu Tezuka and Kazuo Koike would certainly give him a run for his money).

What makes Otomo so special is his ability to adapt his style to a variety of different genres, melding them into composite works where you can't see the join. A good example of this is his series DOMU (A CHILD'S DREAM), which is a trippy crime story with horror and science fiction streaks running through it. It tells the tale of an old man with the mind of a child who lives in a huge housing complex, and who may be causing the deaths of other residents. Like his later work, AKIRA, the backdrop of the story is one of social upheaval, whether on a large or small scale.

AKIRA is probably his best-known work, dealing with two members of a biker gang who are caught up in the return of a powerfully destructive force from years past, and it can be read as paralleling the 1960s social movements in Japan, where demonstrations and rioting would eventually produce a markedly different country from the one that suffered two atomic detonations only twenty years previously. If you don't want to read it on that level, though, the series is still an explosively powerful piece, and with the differences between comic and movie version being what they are (and they're too numerous and extensive to sum up here), both should be experienced in order to get the full effect.

The key to Otomo's success is that his work is layered; if you're not up for a bit of political or social education, the stories are still mad and fun, and things explode. There are cops and bikes and swords and violence. There's also politics and social satire and great SF concepts. If you already have Kirby on your bookshelves, or Giraud on your coffee table, you need to get some Otomo in your hands.