Most of us will never experience life under the heel of a truly fundamentalist regime. In Marjane Satrapi's astonishing memoir, she takes the reader just close enough to really appreciate that gift.
08 August 2003 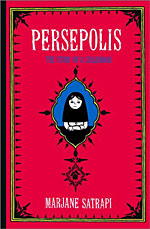 Every so often a graphic novel is published that reminds you just how good comics can be and why you read them in the first place. PERSEPOLIS is one of those comics. Like Art Spiegelman's MAUS it tells a huge story in tiny pictures. Like Joe Sacco's PALESTINE and SAFE AREA GORAZDE, it acts as a documentary of affairs that are still current long after the TV crews and newspaper journalists have packed up and returned to their safe existences at home.

PERSEPOLIS was first published in two volumes in France to great acclaim through L'Association (the same people recently responsible for David B's acclaimed graphic novel EPILEPSY). The briefest of glances at the book's back cover reveals such acclaim is equally bestowed on the English translation, with glowing recommendations from the likes of feminist icon Gloria Steinhem and multi-award winning novelist Philip Pullman.

PERSEPOLIS is author Marjane Satrapi's autobiography of her childhood, growing up in Iran during the turbulent times of the late seventies and early eighties. This period in Iran saw a lot of changes; the toppling the dictatorial Shah, the Islamic revolution, and a subsequent war with Iraq. 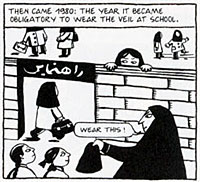 But these huge events, the stuff of 1001 news bulletins, are the backdrop of the narrative rather than its focus. Persepolis is first and foremost a story of a Satrapi's childhood, the story of a little girl growing up into a world that she does not understand. The child of liberal Marxist parents and, incidentally, the grand daughter of the last emperor of Iran, (a fact revealed almost as an irrelevance, though it may explain why Satrapi's family are so well educated), young Marjane is incredibly engaging in her dual role as narrator and subject.

Young Marjane enjoys juvenile dreams of becoming a wise and just prophet, or a revolutionary who will forbid the suffering of 'old people'. But as she grows, Marjane comes to understand that God cannot prevent anyone's suffering and that revolutions do not bring only positive change. This realisation is hammered home by the fate of Marjane's uncle, a former political prisoner.

However, more than the catalogue of suffering and executions it offers, one of the most compelling aspects of PERSEPOLIS is the tiny acts of defiance that Marjane, her parents and their friends perpetrate so they can cope with living under the shadow of a fundamentalist government. Behind closed doors, the hijabs (headscarves) come off and people still go to parties, listen to music, and do all those things that leaders of the Islamic revolution claim are un-Islamic. 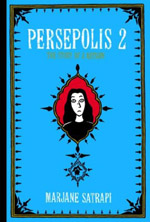 These moments of defiance often seem funny, like the story in which Marjane's dad smuggles an Iron Maiden poster into Iran hidden in the lining of his coat, but the punishments for such acts are far from trivial. Beatings and other punishment are a constant threat - that is, unless a fine is paid that, while not necessarily absolving your crime, often persuades the so-called guardians of the revolution to turn a blind eye.

The artwork is eloquently simple. A class photo of Marjane's friends shows a group of girls who at first glance are indistinguishable from each other, yet at second glance we see different hairstyle poking through the hijabs, different eyes and expressions, and eventually we look close enough to see different people. The art seems to be almost a cross between Persian friezes and children's doodles, but they are enough to communicate the very real dangers that Marjane and her family faced.

What really makes the book so compelling to read, however, is the tone set by its mischievous, smart and funny narrator. Who can resist a protagonist who can pass off a picture of Michael Jackson as Malcolm X to the guardians of the revolution? Who stands up in class to tell her teachers exactly where the propaganda they are being taught is inaccurate, and who is ultimately so outspoken that she must be sent out of Iran by her parents for her own safety?

A comic set in Iran during the Islamic revolution sounds like it ought to be a worthy but dull read; more a chore than a pleasure. Marjane Satrapi has taken a serious tale and made it witty, engaging, and immediately accessible. As soon as I started reading PERSEPOLIS, I couldn't stop until I was done. And as soon as I was done, I had to recommend it to all my friends. And that is the best response that any graphic novel can provoke.