Vertigo is the home of the conceptual makeover, and Peter Milligan is the past master when it comes to stories about identity. Put the two together, and can they turn an old action comic into a sophisticated high-concept series?
19 July 2004 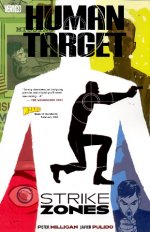 In many ways, HUMAN TARGET marks a return to the roots of comic publisher DC's Vertigo imprint. Like THE SANDMAN, the comic that was at the core of its launch over a decade ago, Vertigo's recent offering is also based upon a 're-imagining' of an old character from the DC Universe, in this case Christopher Chance, The Human Target, created by Len Wein and Carmine Infantino.

Chance is a counter assassin - he impersonates people for money, can dodge bullets and mete-out a lethal response to anyone who is attacking 'him'. There is just no guarantee that Chance will just stick to the job at hand. You see, Christopher Chance doesn't just stand-in for the people he is impersonating, he also becomes them - he gets under their skin and starts to think like them, and as often as not, Chance doesn't like what he sees.

This is familiar territory for writer Peter Milligan, who's previous Vertigo revamp, SHADE THE CHANGING MAN, also hit upon a recurring theme of identity. Another motif that these series share is their exploration of modern America. The main question posed by the series, though, is how can a man who can become anyone find himself? 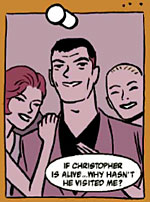 STRIKE ZONES is actually the third outing for Milligan's Human Target, following the eponymous four issue series featuring the art Edvin Biukovic, previously reviewed here, and THE FINAL CUT, with Javier Pulido. Unlike those previous tales, this book doesn't consist of a single narrative, but rather three shorter stories, the first of which acts as a coda for THE FINAL CUT. This might seem something of a mistake, thrusting new readers right into the middle of a tale of multiple uncertain identities with little indication about who is who - but this is pretty much the point of the exercise. This is, after all, a series of tales about identity, and in this not so introductory tale Milligan demonstrates through show, not tell, quite how screwed Chance really is.

The other tales in the collection are both two-parters. The first takes a story plucked from the headlines - accounting fraud - and ties it in with the terrorist attacks of September 11th 2001, a recurring touchstone for the series. The third tale opens with the figure of a Cuban baseball star, and rather than tell a story about Cuba, with baseball as the backdrop, Milligan actually tells a story about baseball and pro sports in the US. If you think you can tell where Milligan's stories are going, odds are you can't, as Milligan tends to stay at least one step ahead of his readers.

As Orson Wells' Harry Lime says in THE THIRD MAN, "You and I aren't heroes, the world doesn't make any heroes outside of your stories..." That's equally true here. If anything, the defining characteristic of HUMAN TARGET is how monstrous everyone actually is, from our protagonist down through all his clients. Even the bystanders and victims seem far from innocent, each mired in their own messy agendas that aren't so much a part of a wider conspiracy as part of a sprawling mass of humanity that is contemporary American society. In STRIKE ZONES, no one gets out unscathed. 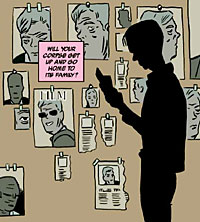 The core of the book is Milligan's incredibly tight writing. There is seldom a word wasted, and hes' able to tell rich, rewarding tales told in relatively few pages. This stands in stark contrast to other comic writers whose goal of manga-style decompressed narratives has led to very little story being stretched over multiple volumes. The three stories that STRIKE ZONES manages to cram in seem like a veritable feast of fiction by comparison.

Milligan seems to work best in small spaces. Most of the dialogue and captions can be read at least two ways and almost everything has plural meanings. Like all the good mystery stories, the clues are all there in plain sight. Sometimes they're easy to spot, other times less so, but whichever the case, the writer always shows his readers a great degree of respect. There are just enough hints for readers to work out the thrust of what they think is going to happen, but Milligan always manages to fit in enough unexpected twists and turns to get you to a destination that is both unexpected yet totally consistent and satisfying.

As with the THE FINAL CUT, the artwork is provided by Javier Pulido. While his work is undoubtedly better suited to the glossy paper treatment it received in that previous tale, its elegant simplicity works perfectly throughout most of the book, but the quality trails off dramatically in the last story. Whether this was due to the artist rushing to complete deadlines, or the change in colourist from the remarkable Lee Loughridge, or merely down to artistic experimentation, it's impossible to guess, but at its best, Pulido's art evokes David Mazzucchelli, while at its worst, it still can't detract from the complexity and sophistication of Milligan's stories.