In addition to being a master storyteller and a tremendous innovator, Will Eisner was also a great teacher. Long before anyone else was prepared to take comics seriously, he set out to establish the creative language of the artform.
07 February 2005 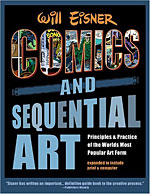 With a career that spanned over 60 years, Will Eisner's achievements in the field of comics are almost too numerous to count. So, it is perhaps a little surprising that one of his most important works was not a comic, nor even a graphic novel, but something more conventional; a text book. Specifically, a text book on how to create comics, entitled COMICS AND SEQUENTIAL ART.

The term 'sequential art', coined by Eisner, is an obvious and overt attempt to challenge the frivolous, humorous, childish and disposable connotations of the word 'comic', replacing it with a term that is more descriptive and perhaps a little more respectable. It might not seem very elegant, but it certainly served its purpose, challenging prevalent assumptions about what comics were.

First published twenty years ago in 1985, COMICS AND SEQUENTIAL ART entered a very different comics marketplace from the one that we know today. MAUS, WATCHMEN and THE DARK KNIGHT RETURNS had not yet had an impact on public perception of comics, and the medium was still widely regarded as consisting entirely of unsophisticated sub-literature designed for children.

For this reason, COMICS AND SEQUENTIAL ART is probably equally as important as a milestone of how comics regarded themselves as it is as a guide to the many ways in which comics can and do work. Eisner held a lifelong conviction of comics' intrinsic worth as an artistic medium. Drawing on his own considerable experiences as a cartoonist, as well as his seventeen years teaching at the School for Visual Arts in New York, Eisner set out to create a guide to how comics work so he could prove it.

While COMICS AND SEQUENTIAL ART 's contemporaries, such as HOW TO DRAW COMICS THE MARVEL WAY, focused on touting the virtues of a house style, Eisner had more ambitious goals for his own book. In it, he explores the diversity of tools a skilled cartoonist has at his disposal for manufacturing not just stories, but meaning in all forms in his work.

Structurally, Eisner's book is broken down into six core chapters on how comics work and a further two exploring under-developed areas of potential. These divisions might seem arbitrary, but try as I might, I couldn't think of a way to do it that would be more clear and straightforward. The process might seem akin to dissecting a living organism, with the inevitable death that this causes to the organism being dissected, but it is also vital for one's greater understanding of how different elements, the different organs, of a comic work.

The first chapter attempts to make explicit the way in which comics are read, not just in terms of moving from speech bubble to speech bubble, but also in terms of page composition and even in the expressive qualities of various forms of lettering. The second looks at how images alone, without the use of text, can work as a comic strip.

The third and fourth look at the panel, or 'frame', and how it conveys time and controls the flow of the comics narrative. The fifth looks at the ways in which human anatomy can be used to convey emotion. The sixth looks at the flow of give and take between the demands of the information to be conveyed in a script and the numerous ways, each with its own subtle shades of meaning, in which an artist can convey this information in comic strip form.

Eisner repeatedly employs comparisons between the structures of comics, such as page composition and panels, and the structure of other arts forms, such as the grammar of written text. These comparisons seem strained at times and less than convincing at others, but he nevertheless manages to communicate his points in broad strokes. The detail of such analogies might not hold up to close scrutiny, but they do help communicate ideas about a medium that has had great difficulty in evolving its own critical vocabulary.

Eisner's book isn't just devoted to the creative side of comics creating. In the last two chapters is a section given over to a description of the numerous printing processes used to create comics, and the various effects these process have on finished comic art. This is something that all aspiring comic creators need to have in the back of their minds.

The major thing that strikes you again and again throughout COMICS AND SEQUENTIAL ART is the amazing passion that Eisner had for comics throughout his career. It's an infectious enthusiasm, both for comics as a medium itself and for experimentation within that medium that, it is implied, will lead to comics realising more of their massive potential.

To illustrate various points and techniques, Eisner draws upon examples from his own work, most prominently from THE SPIRIT, the newspaper insert he produced,(with a break during his wartime service) between 1940 and 1952. This has the side effect of providing Eisner with a showcase for his own talents as a cartoonist - the extracts from LIFE ON ANOTHER PLANET certainly succeeded in prompting me to buy the full graphic novel.

Of course, there are problems with this approach of an artist using his or her own work to illustrate the various ways in which comics convey meaning. It limits the author, not just to the way that he or she draws, but also how he or she thinks that meaning can be conveyed through comics. While Eisner was a great champion of experimentation in comics, not even he adopted and experimented with absolutely every method of making comics one could conceive of. Thus Eisner fails to speak outside of his own experience.

In a later book on the medium, UNDERSTANDING COMICS, Scott McCloud wrestles with this problem of demonstrating styles of comic making that he himself does not employ with far greater ease by simply copying a style or technique and attributing it to the creator responsible.

Another strength McCloud's book has over Eisner's is the self-confidence it shows in its approach to the medium. While Eisner notes how comics can be used to great effect for conveying instructional information, illustrating this point with examples of the technical strips he produced for the US army's Preventative Maintenance Monthly, he does not go as far as to render COMICS AND SEQUENTIAL ART as a comic strip itself. Consequently, the book leaves itself open to the obvious criticism that, if comics are so great, why did it take a text book to explain them?

Fortunately, chutzpah is not something Eisner can be found lacking in other areas of his book. Throughout COMICS AND SEQUENTIAL ART, he repeatedly invokes the words and theories of the great and the good, from Albert Einstein to JB Priestley, in the course of his explanation of how comics work. He even adapts an extract of Hamlet into comic strip form, transporting the action to a late 70s New York ghetto setting. The message is simple; comics, like film, have their own peculiar strengths that can serve and amplify even the most acclaimed word-based texts.

Ultimately, as Eisner is at pains to point out throughout COMICS AND SEQUENTIAL ART, comics are capable of doing far more than is usually asked of them. His implicit challenge to the generations of comic creators to come, echoed in every page of his book, is to play a part experimenting with the comics medium, to play a part in fulfilling comics' limitless potential. Surely, that is challenge worth rising to.