Matthew Craig went shopping and all he got was a chance to muse on the British bookstore market; why Joe Quesada won't do OGNs; and how cinema may be no match for V FOR VENDETTA.
07 March 2005

Having been bought out by a national chain of entertainment stores, my local comic shop ("local" = "thirty minute drive") has recently undergone something of a makeover, expanding its shelf space to accommodate an ever-broadening range of comics, paperbacks and graphic novels. Where once upon a time they managed to cram about four shelves of the most popular American and Japanese titles into a space the size of a footlocker, they now carry everything from ADAM STRANGE to ZOIDS, all under one roof.

It's a rolling transformation. Sometimes the new releases are deep within the store, next to the graphic novels and gothboots. Sometimes, they're closer to the till. This week, they're at the front of the store, stopping the customer in their tracks as they enter with the promise of that New Comics Glow (aka The WITCHBLADE Sweats).

When I visit the comic shop, I have a definite destination in mind: I head straight for the trade paperback, graphic novel and manga section. I spend about ten minutes browsing the shelves, looking for new releases, books that I'd missed on previous visits, or, on rare occasions, an impulse buy. I rarely bother with the monthly comic shelves because I have a regular (though ever-diminishing) standing order.

I've developed these habits over the last twelve years or so, but I only have one actual rule when it comes to buying comics: I never visit the comic shop more than once a week. I adhere to this rule religiously. So, naturally, I cheat, and visit my local chain bookstore,whenever I get the DTs. In this case, "local" = "ten-minute drive".

The trouble is, my local chain bookstore is crap. Every week, it's the same thing: straight in the door, straight to the graphic novels, and straight out again. They stock a few of the usual suspects - Satrapi, Spiegelman, Bart Simpson - but that's about it. 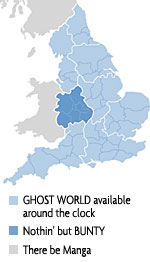 On one hand, it's a good thing: I don't go over my weekly comics budget. On the other, it sets me up for regular disappointment. And worse, in a broader sense, it means that the people of my small West Midlands town aren't exposed to the sorts of comics that the high-fallutin' people of Leicester and Nottingham enjoy. (Look at them there, lording it over us with their SWAMP THING trades and their copy of EGG STORY.)

That's not to say, however, that my town is a complete comics desert. Quite the opposite: our newsagents and supermarkets are well stocked with comics for readers of all ages, shelved where busy parents/spouses can be pestered into buying them. Titles range from the new, Ã¼ber-hip DANDY through to THE SIMPSONS and FUTURAMA. The 2000AD line and Panini Comics reprints are also available in larger newsagents.

So, while the Grand Bookstore Comics Revolution hasn't quite advanced as far as my little hamlet, the chances are that, when it arrives, it'll receive a warm reception.

At his recent panel at Megacon 2005, Joe Quesada reiterated the company line, which states that it does not make economic sense for Marvel Comics to publish original graphic novels.

He has a point: why publish a 150-page novel in one edition without advertisements and on one grand occasion when you can serialise the same material over six months, sell advertising space in each of the monthly instalments, solicit variant cover editions, trumpet the thing as the best thing since sliced Batusi in press release after press release, and then get to do it all over again when the trade paperback (or the hardcover, or both) is released, six months down the line?

Well, since you asked...

For one thing, despite the slightly cynical attitude towards Marvel's current policy of sculpting stories to fit neatly in a Â£10 paperback, there's a difference between writing six 22-page chapters and writing one long novel. The lack of enforced chapter breaks allows the creators to control the pacing of the story, rather than the format. And greater creator control can only be a good thing, right?

Of course, once the books are on the shelves, it's hard to tell which are the first-run graphic novels, and which are the newly-collected trade paperbacks - and harder still to think of a reason why someone who wasn't immersed in the minutiae of comics would care.

Assuming, of course, that they haven't just walked into my local bookshop. 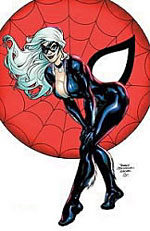 Another advantage to going straight to the bookshelves is that it avoids - or maybe prolongs - the sort of schedule slippage that has recently plagued such creators as Kevin Smith and Quesada himself. Smith went on Jay Leno's THE TONIGHT SHOW to promote his Spider-Man mini-series, THE EVIL THAT MEN DO, back in 2002. Imagine how well it might have sold, riding the massive popularity wave of the Spider-Man motion picture, if Smith had gone on the Tonight Show with a single book to promote, instead of a six-month commitment (stop laughing at the back).

By removing the element of serialisation - by having the book finished before publication, and/or by publishing it as a straight graphic novel - you remove the danger that, for whatever reason, the reader is left hanging during the middle of a story by a creator who would much rather not be disappointing his audience. Of course, this approach would necessitate paying the creators a great deal more up-front, and ahead of publication, which leads us back to those pesky harsh economic realities.

It's a terrible shame that Marvel - and other publishers, for that matter - can't break into this potentially lucrative market, while making advances in other fields and formats. It's a shame that they don't have the confidence to try it, even once. The closest they've come in the last couple of years has been the excellent Garth Ennis/Richard Corben novella, PUNISHER: THE END.

Taking monthly comics back into convenience stores is a good first step in reaching out to a new audience, but it would be nice to have something more substantial to buy as well, whether it's an 80-page annual or a 150-page graphic novel. Prestige items such as graphic novels would be an excellent one-time purchase for people who wander into their local comic shop, or out of the Diet & Self-Loathing section of their local bookstore, but who only want to buy a book, not a lifestyle.

And as for poor old `Nuff Sayers like me, it would be nice to see something genuinely novel come out of the House of Ideas.

YOU'RE MY SAVIOUR, NOW

The news that James Purefoy would be playing the title role in the upcoming adaptation of Alan Moore and David Lloyd's V FOR VENDETTA was met with a nervous response. After all, V's face remains hidden from the reader throughout the book, and what actor wants to hide their face behind a mask for two hours? Sylvester Stallone wouldn't do it. Michael Keaton wouldn't do it. Even Tobey Maguire couldn't go five minutes without ripping his mask off on live television. (Maybe he thought he was playing Ultimate Spider-Man?)

Purefoy set some minds at ease this weekend with the announcement that he would indeed be masked throughout the film. I, for one, breathed a sigh of relief. But it left me wondering: is that enough? Or is it too little, too late? 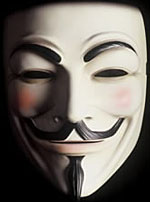 To my mind, the comic book version of V is a prime example of reader projection at work. V is constructed from three important components: the few lines of dialogue that Moore, through the supporting cast, uses to describe the character; the Guy Fawkes costume and eerie porcelain mask that we almost never see the character without; and finally, the preconceptions and prejudices that the reader brings to the table. V's voice, for instance - what accent does he speak with? How deep is his voice?

What is reduced to simple text on the printed page unfolds into a manifold choir in the minds of the readership. This tabula rasa approach to the character allows V to be anybody, and therefore, everybody, which speaks to the underlying themes of the book.

It may be that, by reducing V to a single, known quantity - by resolving the question of his identity before the cameras have even begun to roll - the moviemakers have robbed the character of some of his mystique. It may be that asking an actor to remain both concealed on screen and anonymous off is asking too much.

Either way, this latest adaptation of Alan Moore's work is shaping up to be quite an interesting piece of cinema - on paper, at least.

I don't watch as much television as I used to. Just the CSI axis, LAW & ORDER, a few cartoons, and BBC News 24. It seems like every time I turn the television on, I'm assaulted by the latest "celebrity" reality show. A newsreader from this, an actor from that. Celebrity Big Brother. Celebrity Come Dancing. Celebrity Fame Academy. Aren't you people famous enough?

It's the sort of second-rate-star-saturation that has turned me off the shared universes of DC and Marvel Comics. These super-continua were originally supposed to be a little bit of fun: a way for creators to occasionally play with other people's toys. But it's gotten out of hand. Company-wide crossovers, whether overt or by the back door, appear to have returned with a vengeance. And whereas before, such crossovers would merely derail a title for a month or so before getting back to normal, they have now begun to reshape entire families of comics, for months at a time.

When comics you don't want to read start affecting the ones that you do care about; when every other issue features spurious guest-stars, and lots of characters unrelated to the major themes and relationships of the series; when the shared universe becomes a prison of irrelevant nonsense and sensationalist twaddle...

When it stops being special...

That's when it stops being fun.

And that's when I stopped reading.