It's good night from him, as Matthew Craig discovers he's not quite the fan he used to be. He explains why he needs to take a break - and, as if to demonstrate the point, shares his proposal for a fat Wonder Woman.
08 May 2006

Did you ever wish you could be a first-time comics fan again? Like, maybe you caught amnesia of the comics lobe (that's lobe, not Loeb), and you forgot everything you'd read, from MR A to DRAGONBALL Z? And it meant you could read all those great comics again for the first time?

FEAR AND (SELF) LOATHING

This is my last extended essay for this mighty organ. And as happens on these occasions, I find myself with too much to say and too little time to say it.

Part of me wants to rail against the 'shared universe' again - the notion that there's no point reading IRON MAN because his character arc is being explored in CIVIL WAR, NEW AVENGERS, AMAZING SPIDER-MAN and, I dunno, PLANET TERRY - but there's not much point, is there? Because the sales figures, the news coverage and the message boards don't lie. This is what they want, apparently: Action Figure Comics, where every superhero is on every page of every story, and where such wildly dissonant characters as Detective Chimp and Sgt Rock can be expected to share page time without throwing faeces at each other in existential terror. 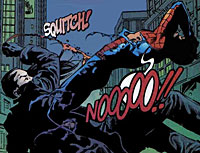 Part of me wants to throw my hands up in despair at the continued degradation of Spider-Man, from Kevin Smith's abhorrent revisions to the Black Cat to the cyclical debate surrounding the Parker marriage. Part of me wants to have one last crack at deconstructing the Totem and Iron Spider stories, while celebrating the simple charm of books like MARY JANE. But what would be the point? People are buying this shit by the tonne, and all I'm doing is twisting my guts into knots.

I'm used to bemused stares in the real world, of course, from friends and family alike. But it occurs to me that I have never been quite so out of touch with the Fanboy Body Politic. I mean, I bought SCARLET SPIDER with a straight face, after all. So what happened? Have I grown older, wiser, or merely out of a certain mindset?

It doesn't help that my default reaction to many news stories and message board threads is one of immediate cynicism. Most of the time, of course, it's justified - or at least, justifiable - but it's still a little bit sad. I'm having less fun online than I used to, and that's a shame.

So what to do? How to cut this Gordian Knot? Where to go from here?

'Away' would be the obvious direction. But first...

Wouldn't it be great if Wonder Woman were fat? Not the crippling morbid obesity one sees exploited on the daytime talk show, but the sort of fat one might describe as healthy, even Rubenesque. A Wonder Woman conceived by Terry Moore, perhaps, or Jaime Hernandez.

One of the few good things to come out of DC's INFINITE CRISIS - perhaps the only good thing, in hindsight - is the notion that while Wonder Woman will always be a (male) fantasy of the perfect modern woman, she has to have some ties to the real world if she's going to be anything other than a cipher. Everything about the character, from her cognitively dissonant costume to her ties to dusty mythology to her frequent virgin/virago characterisation screams falsehood. She can't be a woman if she's not human - even if she already has (literal) feet of clay.

'Wouldn't it be great if Wonder Woman were fat?' Part of the problem may be that she's just too perfect. After all, even supermodels get acne, and you can bet Power Girl gets sweaty boot rash. Wonder Woman's airbrushed plastic beauty is hardly unique in a world where Photoshop turns us all into cartoon characters. But rather than mitigating things, it makes it all the more important that Wonder Woman stands out from the crowd.

I used to work with a girl who looked like a size 16 Wonder Woman. She had the jet-black ringlets, a killer smile, and most important of all, she looked great in platform heels. She wasn't fat by any stretch of the imagination, but she looked like she could beat the shit out of Paula Von Gunther without breaking sweat. All this, and she had a Betty Rubble laugh, to boot. Wouldn't you want someone like that to save you from Doctor Psycho? I know I would.

Changing Wonder Woman's body shape wouldn't solve all the character's problems - 'fat' isn't a personality trait, no matter what children's television would have you believe - but it would be a start. Looking like a real woman might help her become one, and it wouldn't mean sacrificing her strength, her grace, or her beauty. Who knows: if the lead character wasn't quite so unreal, it might encourage more girls to start reading the comics.

THE BALLAD OF BILL BIXBY

The way I experience comics is a constantly changing thing. Five years ago, when I first started writing about the medium, I was buying dozens of monthly magazines, plus a few trades from the relatively limited range on offer in my local comic shop. These days, I buy less than a dozen monthly comics, channelling the bulk of my meagre budget into trade paperbacks, graphic novels, and manga. Thanks to the ever-expanding range of books on sale in my local shop, I often find myself spoiled for choice.

My dissatisfaction with the online comics experience is, I think, symptomatic of that ongoing evolution. I've heard too many conversations before, and the enthusiasm that has greeted many of the more recent stunt comics has, frankly, depressed the hell out of me.

Don't get me wrong: over the last few years, I've watched the comics readership open their minds (and indeed, their wallets) to a broader range of material, which is fantastic. But I wish there were a few more SEVEN SOLDIERS, and a lot fewer INFINITE CRISES.

Believe it or not, I have enough self-awareness to realise that I'm the real problem. I've been online for over ten years, with the last five spent immersed in the comics internet, and that's just too damn long. It's not just that I need to step away from the message boards and the hype stations: I need to find a new way, a better way to engage with the medium. One that doesn't let me indulge my vague social phobias.

I think I need to go back out into the world again.

'I wish there were more SEVEN SOLDIERS and fewer INFINITE CRISES.' A couple of years ago, I took part in two exhibitions, as part of a course teaching business skills to artists. I set up an installation based around two or three short comic strips, and attached hoppers filled with free mini comics, in order to get people to take some comics home with them. While I'm sure that many of the mini comics were used as notepads for shopping lists and phone numbers, I was genuinely surprised to see that people were taking them away and not just chucking them on the floor outside the gallery. Even more amazingly, the hoppers weren't instantly filled with litter or cigarette butts.

By far the best part about the whole affair was the chance to speak to people at an open evening. Most of the visitors were very open-minded about the whole comics thing. To be fair, you might have expected that: they were mainly artists and patrons of the arts themselves, and they were drunk. But still, while the internet is a great place to accumulate enthusiasm, there's something to be said for making that connection face-to-face.

Part of the solution is to get off my arse and make the effort to attend events such as the Bristol Comics Expo and Caption. I've yet to make it down to Bristol, but I attended Caption 2004, and it was certainly worthwhile. However, these events are rare, distant, and expensive, even if all I do is buy a train ticket.

As summer gets underway, that wretched solar tyranny, people find themselves with fewer reasons to stay indoors. I could see a small (small press?) comics stall doing brisk business, as long as it was in the right place. I live in a fairly touristy, art-friendly part of the country: maybe it's time I took my love of comics on the road.

LEAVIN' ON A JET PLANE

So I've been writing about comics for almost five years and, for now, at least, I'm ready to take a good long break from it. But have I learned anything? 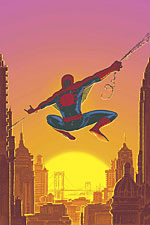 It seems clear that you can either ride the hype, or be dragged under by it. Worse, no matter how hard you type, there are few real places of power on the comics internet: few places where you can reach the whole readership. And if that's the case, then what's the point in getting worked up about crappy characters, Captain Yesterdays, and variant covers that nobody's making me buy? Once I stop giving a shit about books I'm not interested in, will my stomach untangle itself? Will my blood pressure finally normalise?

All those things and more, I suspect. But if you take anything away from these essays, let it be this:

Thanks for reading. Here's to dead dogs and fat Amazons, and a swift end to Omm the Spider-God.