How could a story about three animals on the run be one of the boldest and most inventive comics of the past twelve months? Grant Morrison and Frank Quitely are your guides on an incredible journey.
30 May 2005 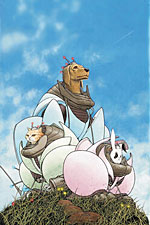 The book tells the story of three lab animals - a dog, a cat and a rabbit - taken off the streets and hardwired into military battle suits. Trained to be the next generation of soldiers, and marked for destruction by the project overseer, the animals are freed by their handler, whereupon they promptly revert to more...traditional patterns of behaviour.

On one level, WE3 is a damning anti-vivisectionist book: the animals are mutilated, trained to talk and obey orders, then discarded, all in the name of waging war. And although lip service is paid to the other side of the argument - characters are allowed to justify or express regret for the way the animals are treated - it's a rather one-sided story. And given Morrison's thoughts on the matter, as expressed in this Newsarama interview, you might not be surprised. Fortunately, for all its indictments, WE3 is also a supremely well-executed comic.

Most of the story is told from the animals' point of view: panels featuring humans tend to focus on fragments of faces - mouths, eyes - rather than the whole thing. Much of the human dialogue is reduced to vocal tics or extremes of abstraction or literalism. The animals' dialogue is pared right down to simple good/bad, hunger/food, friend/foe concepts, which works remarkably well. Morrison does a lot with a little. 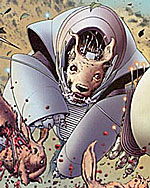 In terms of character, the rabbit is probably the most simple-minded, and therefore the hardest to read. The cat is selfish and suspicious, but comes through for his colleagues in the end. The dog is the most sympathetic character of the group, fiercely loyal to his pack, articulating their hopes and fears in his perfect, bare bones way. Their group interaction follows similar natural patterns, no doubt familiar to owners of such animals: the dog leads from the front, driving the other two on and keeping them together; the cat is stubborn and contrary; and the rabbit ambles on, content to be herded and led.

There are moments of aching loneliness in the story: scenes where the animals seem utterly lost, and where their pain is quite palpable. There are also moments of gentle humour and great compassion, moments where you'll hate Man and his fiendish ways, and one or two places where, amazingly, you'll even find yourself rooting for the cat.

Frank Quitely's art is the best it has ever been, ably assisted by the subtle palette of colourist Jamie Grant. The animals are drawn with a solid realism, and the cybernetic designs are both elegant and weighty. Backgrounds are detailed, but not oppressively so, and Quitely's usual strong depth of field is on display. From dim, claustrophobic laboratories to rich forest vistas, the world of WE3 is both gorgeous and terrifying.

But WE3 isn't just a showcase for Quitely's penmanship: it's a master class in experimentation with the form. The pacing and page design is note-perfect, shifting from breathless, eighteen-panel moment-to-moment pages to double-page spreads of glorious stillness. Wide panels explode into dozens of mini-panels, exploring the action from a hundred angles at once, opening up the whole scene - and even the characters' emotional states. The density of information on the page is as astounding as its clarity. 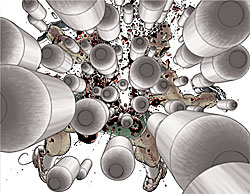 There are moments where the panels appear to fold into and around the page, in an Escher-esque manner reminiscent of peripheral vision. Strobing images drag the reader into, through and out of moments of terrifying brutality with a balletic charm. WE3 does a great job of exploiting and exploring the possibilities inherent in the Great Comics Toolbox. In fact, the only recent comic that even comes close, in terms of experimentation, is PROMETHEA - which had ten times the space to conduct its experiments in.

If I have a criticism of WE3, it's that there are one or two moments when the dog looks, well, a bit mangey. And while none of the animals in WE3 can really be called 'funny', there's at least one panel when the mask slips - where the cat looks more Calvin than Hobbes.

That said, these are minor quibbles in the grand scheme of things. WE3 is a fantastic graphic novel, with much to offer - both as a morality tale and as a first-rate action-adventure.

But the real value of WE3 - and the reason why it should perhaps be on the shelves of everyone who claims to be serious about the medium - is its extraordinary ambition and technical excellence. Drawing on influences as far afield as modern art and classic and blockbuster cinema, WE3 demonstrates a substantial broadening of the vocabulary of comics.

WE3 compares favourably to Morrison's other recent Vertigo work. While it may lack the lunacy of SEAGUY and the down-to-earth charm of VIMANARAMA, it beats both into the ground in terms of action, and its straightforward morality and sympathetic protagonists draw the reader in from the first sight of the front cover.

WE3 might well be Morrison and Quitely's most fulfilling collaboration yet. It's certainly on a par with FLEX MENTALLO, and bodes well for their upcoming run on ALL-STAR SUPERMAN. WE3 shows that both creators are right at the top of their game.