Ninth Art's man in the Midlands reports that the manga bookshop revolution has finally reached his isolated British backwater town. But will it find an audience there, and does it mean anything for the wider comics market?
17 October 2005

As I've gotten older, my comics experience has gotten further and further away. From befogging the glass at the local newsagent to making a thirty-mile round trip to pick up the latest issue of ULTIMATE SPIDER-MAN, I've had to go further to get more out of comics.

Now, I'm sure that there are some of you reading this for whom thirty miles is a mere bagatelle. But while I love my comics, I'm also a very lazy man. Fortunately, however, my grand comics universe just got a little smaller.

If you've been following my contributions over the last few months, you'll already know that my small Midlands town is practically starved for comics. While there are a few small-press creators, the nearest dedicated comic shop is fifteen miles away in either direction. There are plenty of reprint and magazine-style comics on sale in the town centre mall, from AVENGERS UNITED to VIZ, but until recently, the only available graphic novels were PALESTINE (racked alongside GARFIELD), MAUS and GODSPEED: THE KURT COBAIN GRAPHIC. I say "until recently" because, as of two weeks ago, my local chain bookstore installed three shelves dedicated to Tokyopop manga. Which has changed everything. Sort of. 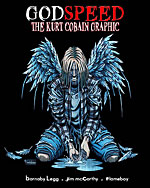 There's a broad range of titles, from ANGELIC LAYER to COWBOY BEBOP, and the shop carries the first two or three volumes of each series. And while the nearest comic shop (fifteen miles away) may offer a broader range, more complete runs, and special discounts, they also have a tendency to sell out of the first volume of a given series. Their reluctance to automatically restock these books can be something of a psychological barrier, making it harder for new readers and casual browsers to be persuaded to try a title. After all, who wants to start halfway though the story?

The appearance of manga in my local bookshop has not been accompanied by an expansion in the range of Western-format comics. The graphic novel shelf holds a few of the usual suspects, but the lion's share of the space is taken up by comics-related hardcovers and 'How To Draw Manga' books. Meanwhile, the SIMPSONS trades continue to gather dust, along with the rest of the Humour section.

A brief conversation with a sales assistant revealed that the bookstore is doing a brisk trade in manga. Customers have ranged from 16/17-year old students to thirtysomething office drones, so it's not all scruffbags and fanatics like me. Some customers have telephoned the store to inquire about titles, and some have even asked to order more volumes of their favourite series. Finally, an introductory offer (three books for the price of two) certainly inspired people to open their wallets.

It may simply be that there are more comics enthusiasts in my town than I thought - people like me (and presumably, you) who already know what they are buying, and who aren't put off by the right-to-left format - or it may be that these books have attracted some genuinely new readers, eager for this type of material.

But what, if anything, does this mean for the state of comics as a whole? Well, as far as I can see, it means that there is finally a relatively healthy marketplace in my part of the world - and more importantly, people ready to support it. More people are exposed to more comics on a regular basis, and can now buy a (relatively) wide range of titles, from THE BEANO to BATTLE ROYALE, without having to actively seek out speciality shops in far-off lands, or muck about with online retailers. Finally, it seems, the mountain has come to Mohammed. 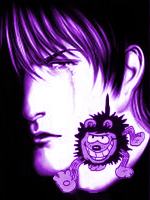 Whether this is a sustainable trend or a passing fancy, I cannot say. I'm certainly not expecting to see any new comic shops in my town centre any time soon. But the chances of someone discovering a comic that might interest them - or even the comic that turns them into a lifelong devotee - are far higher today than they were at the start of the year. And if my small town is comics-friendly enough to support such a (relatively) wide range of titles and formats, then that has to speak well of the broader comics landscape.

Of course, it's nowhere near enough for me. But that's okay: I know where to go for the Good Shit. I am, however, finally able to break my primary comics-buying rule - "never visit the comic shop more than once per week" - without suffering more than a modicum of guilt.

My bank manager, on the other hand, has exploded.

As great as all this news may be, I can't help but notice a dark cloud around this silver lining. Two weeks isn't enough to diagnose a revolution. What sales there have been may be down to nothing more than the relative novelty of the material. And while a shelf full of manga may represent a wider range of genres and demographic targets than, say, a shelf full of superhero comics, it still constitutes a monopoly all of its own. A uniform format (black and white novel-length 6x4" comics, read right-to-left) can so easily become a uniform perception of the medium in the mind of the casual browser - especially if Tokyopop are the only comics publisher of note in small local bookshops like mine.

While it's great to have them, Tokyopop aren't the be-all and end-all of comics - or even manga, for that matter. But right now, they are the next best thing to pioneers. The onus is now on the rest of the industry to follow Tokyopop's example, and drive a wider range of books and formats into all stores, great and small.

One thing that concerns me about the rise in popularity of independent publishers and manga is that so few of them make colour comics. It seems like all of my favourite non-super comics in recent years have been in black and white or greytone, with perhaps a thematic splash of red here and there. 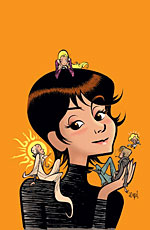 This might be for a number of reasons, both aesthetic and practical. Colour art can require extra personnel, who need paying, and certainly necessitates higher printing costs, which are passed on to the reader in the form of higher prices. Reprint series such as Marvel's ESSENTIAL and DC's new SHOWCASE phonebooks would be prohibitively expensive if printed in full-colour (including the cost of cleaning up the colour artwork). Additionally, the tone of the story may dictate a black and white format - SIN CITY being the most obvious example. Or a creator may feel that adding colour to a story would detract from the strength of the line art or the brushwork of the inker.

But while I wouldn't want to tinker with the elegance of Wood and Cloonan's DEMO, I wouldn't mind if a series such as INITIAL D suddenly sprouted a palette. And I've long felt that it was a crime against Art that Mike Carey's theologicom MY FAITH IN FRANKIE went from full-colour mini-series to greyscale digest, losing a sizeable portion of whimsy along the way.

Colour is a versatile and powerful tool in the comics arsenal, in all formats, and it would be a shame if it were to be confined to the realms of the webcomic and the bodystocking defender. New and returning readers - enticed, perhaps, by the sudden appearance of manga in their local bookstores - deserve to be exposed to the widest variety of comics possible, and it would be terrible if they came to associate colour with something they didn't want to read.

In the rush to grab a share of the rarefied comics marketplace, it may be that publishers and creators of book-length comics are forced to turn to colour in order to make their books stand out from the crowd. But unless full digital colour suddenly becomes a lot cheaper, it would seem likely that some creators would have to go without, or else turn to older, less sophisticated methods of colouring their books.

Wouldn't it be amazing if the next revolution in book-length comics was a Benday dot revival?