Ninth Art's catalogue of comics continues, showcasing two men who created the superhero as we know it, and one man seemingly possessed of superpowers of his own; Bill Finger, Gardner Fox and Jules Feiffer.
17 October 2005 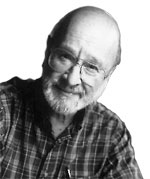 Look up the word "over-achiever" in the dictionary, and you'll find Jules Feiffer drawing the finishing touches of a self-portrait. Playwright, novelist, screenwriter, author of children's books, any one of those occupations would have been enough for us lesser mortals, but Feiffer? He had to do them all.

What he's most famous for, however, is editorial cartooning. A typical page would feature neurotic characters drawn in a minimal style, appearing against a blank background, and fretting over current events and personal problems. His work has appeared in THE VILLAGE VOICE, THE NEW YORKER, THE NEW YORK TIMES (the first and only editorial cartoonist to do so), ESQUIRE and PLAYBOY, steps throughout a glittering career that culminated in 1986 with the Pulitzer Prize.

Fieffer started out in 1940s working for Will Eisner's studio, writing scripts for the Spirit comic strip, until he was drafted into the army for what he claims was "a slight increase in pay". On his off-hours from the service he drew anti-military cartoons and began to develop the character of Munro, a four-year old boy who is mistakenly drafted into the army. When Feiffer became a civilian these cartoons were collected into a book, and then turned into an animated short film called MUNRO which won an Oscar in 1961.

Though not strictly related to sequential art, it is also worth mentioning that Feiffer wrote the screenplays to two movies, CARNAL KNOWLEDGE (1971) and POPEYE (1980). The first was a sex comedy directed by Mike Nichols and starring Jack Nicholson and Art Garfunkel, with a great perfomance elicited from the fey singer-songwriter. The latter was a movie adaptation of the Max Fleischer cartoons, directed by Robert Altman and starring Robin Williams in the lead and Shelley Duvall as Olive Oyl. This film was an unmitigated disaster, and interesting that Feiffer should get a screenwriting credit considering that Altman relies so heavily on improvisation from his actors.

In the comic book industry, being "Fingered" is slang for being denied credit for one's contributions to a story or character. The etymology of this word is sad to tell; Bill Finger was a writer who co-created one of the most famous and widely recognised icons in popular culture, The Batman, but the extent of his input has been regularly denigrated and denied by DC comics. They maintain that Bob Kane was the sole creator of the character and all associated properties, the rights to which Kane duly signed over in exchange for, amongst other compensatory gestures, a perpetual byline that states, "Batman created by Bob Kane".

But Finger's credit is nowhere to be seen.

In 1939, the popularity of Superman in Action Comics led the comic book division of National Publications (later DC comics) to seek and develop more superheroes for publication. Artist Bob Kane created a character named "Birdman", and showed sketches of his designs to Bill Finger, a writer with whom he was a regular collaborator. Finger suggested renaming the character "Batman", replacing the domino mask and wings with a cape and cowl, giving him gloves, and removing sections of the original costume that were bright red. Finger then wrote the first BATMAN story, whilst Kane provided the art. However, because Kane had already submitted a proposal for a Batman character to DC, he was the only person given official credit for its creation.

Batman was a hit, and as his popularity grew, so did the roster of recurring characters and concepts. Finger wrote most of the early stories and, amongst other things, created Bruce Wayne, Robin, the Batcave, the Batmobile, and Gotham City. In addition, these stories were distinctive for their use of giant-size props like giant pennies, typewriters or sewing machines.

Finger also co-created some of Batman's most enduring villains ? Catwoman, The Penguin, The Riddler, Two-Face and Clayface among them. Whilst he wasn't responsible for creating The Joker, Finger did write the first two stories he appeared in, thus endowing the maniacal madcap with most of his identifying characteristics ? including the death-rictus placed upon his hapless victims.

But by far the most important contribution that Finger made to the development of the Batman was embuing him the personality and skills of a detective. Two-fisted action and adventure had its place in these stories, but Batman was first and foremost a world-class sleuth in the mould of Sherlock Holmes and Auguste Dupin. This was a real contrast to the boundless brawn of a character like Superman, and demonstrated that keen intellect could be just as effective as a clenched fist.

In the 1960s Finger was one of a group of long-term staffers that DC fired when they asked for health insurance and other benefits. By the time he died in 1974, he was left with a pittance, having never been officially acknowledged for his work and no family to carry on his fight for credit. The way Finger was treated by DC was utterly reprehensible; even now, when the company would have to nothing to lose by it, they have given him no posthumous recognition whatsoever. Meanwhile, the profits from the juggernaut of Bat-related merchandise continue to roll in.

Albert Einstein once lamented that, had he known the consequences of his theories on nuclear physics, he would have become a watchmaker. If Gardner Fox had seen the continuity nightmare he would cause with a single story, he might have reached the same conclusion and stuck to his first career as a lawyer. That story was FLASH #123, published in September 1961. In it, the Silver Age Flash from Earth-1 met his Golden Age counterpart from Earth-2 for the first time. Confused? You will be.

There aren't enough hours in the day to properly explain the concept, but basically the Golden and Silver Age superheroes in the DC Universe used to exist on separate planes of existence. It was a convenient explanation as to why DC were publishing revamped versions of golden age characters, using the same names but with different costumes and secret identities, and readers seemed to be satisfied by the twisted logic. As time passed, however, the entire line of DC comics became a mind-bending mess of alternate realities and continuity glitches, a situation that persists to this very day. And all because of a single story written by Gardner Fox; little did he realise what a knotty problem he had created for later generations of writers.

That's not to say that he should never have written comics in the first place, oh no. Fox was a prolific scripter who was brimming with ideas, and "Multiple Earths" are the least of his contributions to comic book folklore. He helped create a great many Golden Age characters like Hawkman, The Flash, Dr. Fate, the Sandman and Starman. He was also responsible for writing the adventures of the world's first ever superhero team ? The Justice Society of America. Since Fox had already created five of its original members, he seemed the natural choice to chronicle their adventures as a team fighting the good fight in World War II.

After the war he continued to work for DC, and with editor Julie Schwartz helped kick-start the Silver Age with revivals of many characters that he had created, including the Flash. When it came to relaunching the super-team concept, Fox came up with the Justice League of America, a thinly veiled variation on his own JSA stories. Interestingly enough, the Earth-1/Earth-2 device introduced in FLASH #123 enabled him to stage annual team-ups between the two, a saga that was called CRISIS ON MULTIPLE EARTHS. Needless to say, it proved very popular with fans, and the crossover event has since become a regular feature of comic book publishing.

There's very little doubt that the shape and tone of the superhero genre owes much to the work of Gardner Fox. Which is why it becomes all the more surprising to learn that, along with Bill Finger and several others, Fox was sacked by DC after requesting health insurance and other employment benefits. Julie Schwartz justified the move by stating that the quality of his scripts had been steadily declining, but many fans did not agree. Fox went on to make a living writing science fiction novels and other genre material up until his death in 1986. His influence on superhero storytelling cannot be underestimated, and aspiring writers could do a lot worse than take him as a role model.