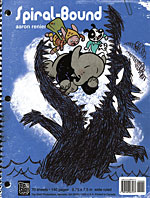 In the early days of comics, books were exclusively made for and read by children. In 1944, a survey by the Journal of Educational Sociology estimated that 95 percent of all boys and 91 percent of all girls between the ages of 6 and 11 in the United States read comic books.

Times change, and while there are many comics geared toward more mature audiences today, there are very few books geared toward comics' original audience. There are plenty of issues involving marketing, distribution, et cetera, but a major part of the problem is this: there just aren't that many creators looking to produce work that's appropriate for all ages.

Thankfully, there are still some books out there to fill the gap, like SPIRAL-BOUND.

With his debut graphic novel, writer/artist Aaron Renier has created one of the most absorbing, refreshing, and touching all-ages books in years. From its notebook-inspired design (complete with pencil in the spine), to the maps in the back, every page of this book exudes charm, warmth, and the assurance that this is a story by someone who remembers what it was like to be a kid, in a summer filled with possibilities both terrifying and exhilarating.

Summer has come to the animal community of Estabrook. For the town's children, it will be a time both for realising their potential and for coming face-to-face with danger. Turnip, a shy elephant, is recruited by his friend Stucky Hound for a sculpture class taught by Ms Skrimshaw, a whale who gets around a large fishbowl on tank treads. Ms Skrimshaw is from the pond, an area of Estabrook where no one goes anymore - thanks in large part to rumours of a large, very nasty monster that lives there. 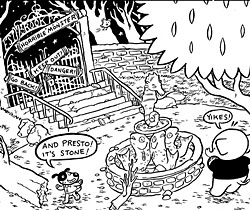 As Turnip finds himself blossoming in Ms Skrimshaw's class and Stucky works on a ceramic submarine, their classmate Ana, an excitable and intrepid rabbit, finds herself on her own adventure. Recruited for the Scoop, Estabrook's (literally) underground newspaper, Ana finds out that Ms Skrimshaw plans to hold the sculpture camp's exhibition at the pond. Fear and prejudice sweep through the community, as the parents denounce Ms Skrimshaw for planning to endanger their children.

The situation soon reaches a boiling point, with Ana seeking to clear Ms Skrimshaw's name. However, she and the others soon find that the true secret of the pond is even more horrible and wonderful than anything they could have ever imagined, and that this summer will be one that they will never forget.

Renier produces SPIRAL-BOUND: TOP SECRET SUMMER in pure black-and-white pages with detailed, tightly packed panels. The result is a story that feels like it's taking place on a series of summer evenings, with everything bathed in the light of the setting sun. The look is stark, beautiful, and not without an occasional sense of unease.

This unease is carried over into the story itself, which deals with the sense of menace and anxiety that sometimes lurks behind the carefree days of childhood. There is a sense that everything could turn out all right, but at the same time, the monster and the angry parents carry an authentic note of fear with them, making it all the more rewarding when the children stand up to those fears. What's also nice about this book is that it's a story about human-like animals that doesn't just treat them like humans with fur. Turnip's dad uses his trunk as an extra arm and fixes peanut stroganoff for dinner, just as Ana's mom makes a carrot cake. When Shorty the giraffe nervously looks around, he does so by craning his long neck. Details like these add to the charm of the story, and to the magical reality of the world it creates.

Another aspect of SPIRAL-BOUND's charm is the detail that Renier puts into every scene. The book deserves at least two readings, one for the story, and one to sit back and linger over each page. From the crowd at June Bug's Deli to the art show to the spectacular sequence at the end, Estabrook feels like a living, breathing place, with many more stories to be told.

There may not be very many comics for all ages, and the ones that are out there often have a slim chance of reaching their intended audience. But while older readers can appreciate SPIRAL-BOUND, it's a book that deserves to get in the hands of young readers as well. It's a book that taps into the sense of anxiety that comes from being small in a big world full of possibilities, and it ends with a moment of wonder as profound as anything in the works of Enid Nesbit or Hugh Lofting.

It's impossible not to be charmed by SPIRAL-BOUND. Buy it for a child you know, or read it yourself, for the child within.