There was a time when most kids read comics - but these days, if they read any comics at all, they're reading ones from fifty years ago. Zack Smith looks at the state of modern comics for kids.
19 June 2006

In 1944, the Journal of Educational Sociology conducted a survey that determined about 95 percent of boys and 91 percent of girls aged six to 11 in the United States read comic books.

While a follow-up hasn't been conducted in the ensuing decades, it's no great leap to assume that the number today is much, much lower. But the comics for children being published today are probably of a much higher quality than those that existed at the time of the survey.

The late 1930s and early 1940s saw the birth of the American comic book as we know it. There were literally hundreds and hundreds of titles being published every month, with six to eight characters in each of them, and every last one of those stories was aimed at kids.

And most of them, let's face it, were garbage. Sloppy, badly-drawn garbage that was written and illustrated under circumstances resembling a Korean sweatshop.

Now, obviously there was good stuff, even great stuff - Will Eisner, some of the CAPTAIN MARVEL stuff (Mac Raboy's CAPTAIN MARVEL JR in particular), Carl Barks on DONALD DUCK and later UNCLE SCROOGE, and so on.

The concern parents had back then weren't that comic books were going to turn their children into a bunch of juvenile delinquent sex maniacs. Well, it wasn't their main concern. Rather, they worried that comics were so poorly thought-out that kids reading them instead of real books were going to grow up as semi-literate dunderheads.

It's where WONDER WOMAN came from. A guy with enormous academic credentials was hired to create a character who would serve as a positive role model and promote solid values to children. Of course, he did this by creating an island full of women who would lose their powers if a man set foot there, but let's not dwell...

Times have changed. Today, comics don't have the luxury of mass-newsstand distribution. There is, by and large, a higher median quality to the kid-oriented comics, but the ones that are being produced are bypassing their intended audience - and, in some cases, the comic book format altogether.

In a much-publicized keynote address at the 2004 Eisner Awards, Pulitzer Prize-winner Michael Chabon argued that in the quest to achieve respect as an adult medium, comic books had abandoned children.

Marvel and DC have become so oriented toward teen and adult readers that material construed as acceptable for 8-12-year-olds is set in an outside universe, usually labeled as 'Adventures'. There's some excellent work being done here, but it's not going to find an audience with the readers of the mainstream books.

And it's not the companies' fault. They're only going with what the readers buy. They've put out PLASTIC MAN, they put out GUS BEEZER, but what sells six figures is CIVIL WAR and IDENTITY CRISIS. For a kid, the Teen Titans are the colourful manga-influenced heroes of the Cartoon Network; for most people who pick up a comic, they're getting their heads punched off in INFINITE CRISIS. 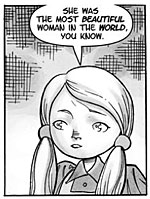 The fact that there are still books like FRANKLIN RICHARDS or JUSTICE LEAGUE UNLIMITED coming out from Marvel and DC is a small blessing. That we still have THE SIMPSONS and ARCHIE is a blessing. They're the publishers whose single-issue books are still going to show up in convenience stores, at Barnes & Noble, still offering a minimal investment that won't cost an entire allowance.

Let us also be thankful for the fact that there are once again Disney books being published in the US (and that poor Don Rosa can finally read his stories in his native tongue), that John Stanley's LITTLE LULU is back in print after all these decades, and that there are still collections of TINTIN and ASTERIX in print. But it's worth noting that those books are either major licenses, or they're reprints of 50-year-old material.

What if someone wants to create something new for kids?

The independent market is already pretty treacherous on that score.

The latest issue of POLLY AND THE PIRATES, a superb all-ages comic by Ted Naifeh, sold 2,400 copies, according to Diamond sales figures. Issue #2 of Marvel's CIVIL WAR, by comparison, sold 240,000 copies. Without speaking to CIVIL WAR's quality, it's clearly not a comic for kids. Someone going into a comic shop is 100 times more likely to find a copy of that than POLLY AND THE PIRATES.

But there is a strong market in bookstores for all-ages material. Manga is the obvious example, but there are others. JM DeMatteis and Mike Ploog's excellent ABADAZAD was rescued from the implosion of its publisher, CrossGen, and recently revived as a series of illustrated books from Disney/Hyperion. These volumes combine heavily illustrated text with sequences of the original comic and - one can assume - new comic book material as time goes on. Mark Crilley's AKIKO has enjoyed a second life as a series of illustrated novels. TRAVELS OF THELONIUS, a new hardcover by Susan Schade and Jon Buller, takes a route similar to ABADAZAD by combining comic book sequences with passages of text. This may very well be the new route for children's comics - comics as books.

This isn't necessarily a bad thing. But it doesn't auger well for those who might try doing a serialised monthly or bimonthly comic for children outside of Marvel or DC.

There are exceptions to every rule. One in this case is MOUSE GUARD, a small press series by David Petersen reminiscent of the REDWALL series of children's books. It's received excellent reviews and plenty of media attention, and often sells out at shops that carry it. But it's still under a lot of people's radars, and it's still too early to call it a breakout hit. 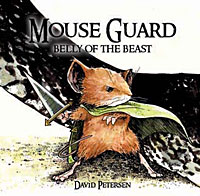 There are some plans to bring kids back into comics taking effect. The new and reprinted material from the larger companies is a strong first step. So is Free Comic Book Day, which always includes a several all-ages books in its wares. There are also some comic book retailers that take the time and trouble to put their all-ages material in a clearly-labelled special section near the front of the store, so that kids can see and find it the minute they come in. Likewise, some bookstores that have graphic novel sections will group material suitable for all ages into a separate section. But the best way to get kids back into comics, of course, is to produce more comics for kids.

But the question remains: Why is it important for kids to read comics? Considering the decades spent getting away from the perception that every last damned book was campy swill, isn't it a good thing that comics intended for adults are now reaching their intended audience?

It's a great thing, of course. But if we're every going to accept that comics are a medium capable of diverse storytelling, that means that there need to be works for all age groups. And lord knows that, in the old days, people first got hooked on comics as kids, just as they started reading books when they were young. Someone who starts reading comics at an early age is someone who could transition to more mature works as they get older.

There's probably a greater pool of talent working in comics today than ever before, bursting with passion for the medium. And while writing for all ages isn't easy, with a lot of work and a little creativity, comics could find their way back into the hands of younger readers again.

Comic books were originally created for kids. The characters in them were created to entertain children. What's out there shouldn't be dumbed down, but the younger audience shouldn't be ignored either.

It may be that we'll never again get 90 percent of all children reading comic books. But kids are an audience worth fighting for. They deserve the best the industry has got.