Before 100 BULLETS, the creative team of Brian Azzarello and Eduardo Risso first worked together on this tight, intelligent private eye noir story. Ninth Art moseys up the bar and orders a DOUBLE.
20 February 2004 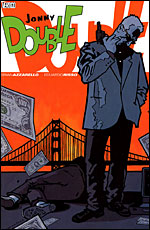 The thing about a crime book is that it works best when it's not about crime.

Oh, there can be murders and robberies and blackmail aplenty, but what makes it work is when there's something in there that says something about the human condition.

It's why the desperate bastards of Dave Lapham's STRAY BULLETS or the psychotic supermen of Frank Miller's early SIN CITY graphic novels stay with us; between all the bullets and double-crosses we're forced to recognise the human elements of these characters, and what's driven them to this point. What is it that drives a man to cross a line? And if he does, can he get back in one piece?

JONNY DOUBLE, the first graphic novel from the 100 BULLETS team of Brian Azzarello and Eduardo Risso, takes a badly dated DC detective character and puts him through the wringer, placing him in the kind of situations that would make Philip Marlowe or Lew Archer flinch. While the book's primarily noted for bringing together what would become an incredibly popular creative team, it's an excellent read in and of itself, a tale of a man past his prime looking for an idealised big score, and, inevitably, finding nothing but trouble. 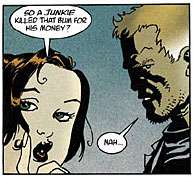 Jonny Double is a private investigator, and a good one, but he seems to have forgotten that the sixties were over a long time ago. He talks in a jive style that would make Ed 'Kookie' Byrnes flinch, and hangs out in an area of San Francisco that can't even remember when it saw better days. But he's basically a decent man, who stands up for the little guy and remembers those whom everyone else has forgotten. He clings to that, or tries to, as the world goes to hell around him...

Enter Faith. Ostensibly, Jonny is supposed to be paying his rent by keeping an eye on her. Except she's young, and vivacious, and would rather Double did more than just watch. Plus there's her friends, a new-school crew of hackers who've found a dead bank account belonging to a dead man, and who want Double to help them out. It's a sweet score, how dangerous could it possibly get?

Very dangerous indeed, as it turns out...

Revealing any more would ruin the twists and turns the story takes, but suffice it to say that Double crosses a line and soon lives to regret it. And it should probably go without saying that several of the characters aren't what they seem, while others are exactly what they seem, and it's difficult to know which is worse. And while I'm saying all of this anyway, I'll also say that by halfway through the book, the reader is definitely forced to wonder how Double can possibly hope to get out of this mess in one piece. 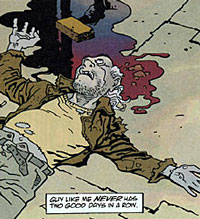 JONNY DOUBLE is a slightly different read from Azzarello's work on 100 BULLETS; with a limited amount of space to tell the story, there's less of his trademark urban patois and evasive conversations, and a heavier emphasis on action and moving the plot forward. At its heart, the book is a story about conflicting values, between Double's generation and the hackers, and Double's dated values and the modern world. In the end, these conflicts pay off with a heavy dose of irony and some dark, heartbreaking twists.

Of course, there's no denying that one of the main selling points of the story is Eduardo Risso's art. This is a challenging script to work from, containing several long monologues and an average of seven panels per page. It's made even harder given that Risso barely speaks any English (this was his first work for a major US publisher), meaning the scripts he was working from had to come via a translator.

Yet the collaboration seems seamless, with Risso brilliantly capturing every piece of garbage in San Francisco's alleys and every bruise on Double's beat-up face. Risso is especially skilled at three things that seem to present most artists with a challenge: Facial expressions, backgrounds and clothing. He's able to make every character and environment unique, and it plays a large part in making this story work. This is a tale about different worlds overlapping, and it's important to show just how different those worlds are.

JONNY DOUBLE is a slick, tight read that stands up there with not only Azzarello and Risso's best work on 100 BULLETS, but also with the best crime comics out there. Like those works, it asks tough questions about human nature, and the answers aren't easy or pretty. For all the gunplay and dismemberment, this is ultimately the story of a guy who wants to believe in something good and pure, but who can't seem to find it no matter how hard he looks. Like any great crime novel, it's not just about the crime.