Ray Bradbury is one of the masters of fantasy and sci-fi, so it's no surprise that some of his 500 works have made the leap to comics. IBooks brings together some of the best, with contributions from Chiarello, Mignola, Russell and Van Fleet.
23 August 2004 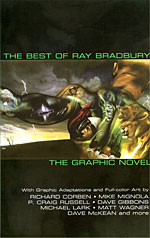 It is both appropriate and mystifying that Ray Bradbury's works should be translated into comic book form. Appropriate, because it was Buck Rodgers that inspired Bradbury to start writing, and because Bradbury was one of the first major SF writers to allow his work to be adapted into comic form with the EC adaptations of the 1950s. Mystifying, because so much of Bradbury's work is based on putting the reader psychologically in the scenarios he conjures up.

You can't, for example, simply take his description of the sweltering heat of an African veldt and just sum that up in an image. You can draw an effective picture, even put the original words down on the page, but at best, you're still providing your own interpretation of the story.

Bradbury's prose is notoriously difficult to adapt to any medium. Even a talent like Richard Matheson couldn't adapt THE MARTAIN CHRONICLES to television without resulting in an overlong mess with Darren McGavin in a cowboy suit. Adapting a Ray Bradbury story into comic form seems like a nigh-impossible task.

Thankfully, Byron Preiss picked some of the best and most experimental artists in the industry for the series of Bradbury adaptations produced for Bantam Books and Topps Comics in the early 1990s. Now the best of these adaptations have been collected by iBooks in a handsome new volume, THE BEST OF RAY BRADBURY: THE GRAPHIC NOVEL. While not all of the stories work, the best pieces are textbook examples of how a prose story can be effectively translated into the medium of comics.

Richard Corben starts things off effectively with the classic 'A Sound of Thunder'. Over the course of twelve pages, Corben translates the original story's prose and dialogue into carefully constructed page layouts to build the tension. The result is a story every bit as suspenseful and disturbing as the original. It's a shame, though, that they didn't also reprint Al Williamson's EC adaptation for comparison.

Mike Mignola's adaptation of 'The City' is undercut by the pages being out of order (I thought it was just my copy, but others I've checked have had the same problem). Printing issues aside, it's a well-paced little fable of an alien city taking revenge on the Earthmen responsible for its depopulation, with some images that would be right at home in HELLBOY.

'Dark They Were, and Golden-Eyed', the first of many stories in this volume to deal with Mars, is one of the best, combining the uneasy, sepia-toned art of Kent Williams and John Van Fleet and a mix of typeset and handwritten prose to tell a deliberately anachronistic tale of a family's gradual loss of identity. Van Fleet also does an excellent job with 'Picasso Summer', a tale of a man who has only a short time to make the best of a once-in-a-lifetime encounter. 'The Golden Apples of the Sun', despite some poorly scanned art, uses P Craig Russell's fluid but detailed pencils to lend a dreamlike quality to an SF retelling of the Prometheus myth.

Not surprisingly, some of the best stories in the volume are adapted from Bradbury's less-known works, giving the artists more leeway to interpret them. The highlight is 'A Piece of Wood', by Mark Chiarello, which consists entirely of two men sitting in a room talking. Chiarello uses a combination of different colour schemes to illustrate the conflicting viewpoints of the speakers, and the final page presents one of the most chilling images in the book. 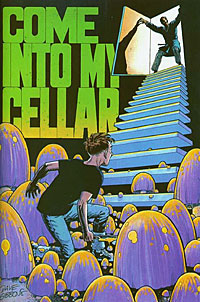 Dave Gibbons uses an elaborate four-tier grid for 'Come Into My Cellar', a darkly satirical look at mail-order ads. 'It Burns Me Up', by the all-star team of Harvey Kurtzman and Matt Wagner, employs cartoony, abstracted figures to tell the story of a corpse narrating the aftermath of his murder with pungent wit. And Wayne Barlowe does a straight text-and-prose adaptation of 'The Foghorn' that perfectly compliments the sense of building menace and heartbreak of the original story.

At their worst, the stories in the volume are well done but unmemorable, such as Daniel Torres' 'Night Meeting', Jon J Muth's 'The April Witch', and P Craig Russell and Michael Lark's 'The Visitor' (which Bradbury seems to have confused with another saviour-on-Mars story, 'The Man', in his introduction).

However, none of the stories in this volume are dull to look at. Most of the adaptations are both written and illustrated by a single artist, and the highlight of each story is how these artists convey the sense of place and emotion that are crucial to each story's success.

Gibbons' panel-packed adaptation of 'Come Into My Cellar' uses only the bare minimum of information for each panel, adding to the building atmosphere of paranoia as minor details add up. Corben's adaptation of 'Thunder' combines smaller panels for the present-day sequences with larger panels for the appearances of the dinosaurs, conveying the alien, overwhelming nature of the creatures. 'It Burns Me Up' uses a six-panel grid along with its cartoon-like images to convey the limited, distorted POV of its deceased protagonist, moving to a splash page for its bitter finale. These adaptations are not just textbook examples of how to adapt a prose story into comic format, but of the many different ways that a story can be told visually.

Ray Bradbury's work is filled with fluid prose and phantasmagorical imagery that are almost impossible to translate into a visual medium. I say 'almost', because the stories in this volume often prove to be entertaining exceptions to the rule, combining classic stories with memorable, evocative art.

While they may only be the artists' personal interpretations of these stories, the talents involved are able to either capture what made the stories so memorable in the first place, or interpret them in a way that makes them seem completely new - and show why adapting Bradbury into comic form is entirely appropriate.