If you go into the woods today, you're sure of a big surprise - but it's not the twilight, the mystics or the night things you have to worry about; it's a little girl named Courtney Crumrin. She's very, very good. And she's horrid.
25 October 2004 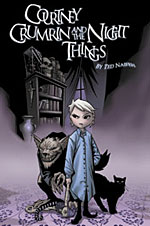 Some of my favourite books as a kid were by Roald Dahl, who, aside from being a great children's author, was also an accomplished writer of horror and suspense. To unknowing adults, it might seem strange that the same man who could write lovingly about magic chocolate factories could also be the man responsible for the story behind that ALFRED HITCHCOCK PRESENTS episode where the woman clubbed her cheating husband to death with a frozen leg of lamb, then cooked and served the murder weapon to the investigating officers. But us kids knew better.

Dahl's books had cute, innocent covers, but they also had James' horrible aunts being crushed by the giant peach, the Trunchbull locking Matilda's classmates in a tiny room with broken glass stuck in the walls, ugly giants stealing children to eat, and, of course, the terrible fates of Augustus Gloop, Mike Teevee and Violet Beauregard. (Veruca Salt got off lightly.)

Dahl's books tempered their fantasy with a sense of danger. You could have magic, wonder and a happy ending, but there was the sense that his characters paid a price for all that wonder. It's a tone that few others have been able to capture, let alone translate into another medium. Even the Dahl-scripted movie WILLY WONKA AND THE CHOCOLATE FACTORY dulled a few of the book's edges with cutesy songs, and a director as edgy as Nicolas Roeg still sweetened the ending of THE WITCHES. It seemed that Dahl's mixture of mirth and menace died with the man.

That is, until Courtney Crumrin came along.

Since premiering in 2001, Courtney's oval, nose-less face has scowled its way through three increasingly dark, increasingly entertaining mini-series from Oni Press, abetted by the Herculean talents of her creator, Ted Naifeh. The result is some of the most wicked (and wickedly funny) fantasy comics of the last several years, the sort of stuff that can have you shivering in your seat on one page and cackling evilly on the next. Like Dahl's best work, it has a dead-on understanding of a child's point of view... and also understands that magic and wonder are not the kind of things that you can use without a price.

The first mini-series, COURTNEY CRUMRIN AND THE NIGHT THINGS, tells four short stories that introduce us to Courtney and the other residents of Hillsborough. Courtney's parents have moved to the isolated-but-affluent community, partly to take care of Courtney's wealthy Uncle Aloysius, but mostly because it's the only place that will let them hobnob with the rich and famous without falling further into credit card debt. Courtney is not particularly happy about living in a creepy old house with a creepy old man, but soon finds something even more horrifying in Hillsborough - her snobby, elitist classmates.

The creatures in the woods aren't exactly comforting, either. 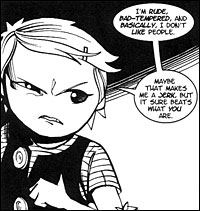 Over the course of the first miniseries, Courtney discovers that Uncle Aloysius knows a thing or two about dealing with these creatures, and that the dark arts are a particularly effective way to deal with the snobby and elitist. This is not to say that life is necessarily perfect - this is a world where people who die stay dead, and magic can be used against you just as easily as you use it.

For that matter, Courtney discovers that having magic powers doesn't necessarily win you friends, or at least not the kind of friends you'd want. The first volume ends with a valid but not entirely comforting lesson - being yourself can be lonely as hell, but it beats being a brain-dead conformist.

The second miniseries, COURTNEY CRUMRIN AND THE COVEN OF MYSTICS, expands upon the mythology introduced in the third issue of NIGHT THINGS, while also opening up new possibilities in Courtney's character. A terrible hobgoblin by the name of Tommy Rawhead is murdering members of Aloysius's coven, and Aloysius's associates want him to face the creature.

Though told to stay out of this conflict, Courtney finds herself drawn into the machinations of the coven. In the process, she meets a surprising new teacher, has an adventure in another form, and finds herself in the middle of a bizarre love triangle/witch hunt. She also discovers that the wall she's built up to protect herself from the world can be a barrier as much as a defence.

While NIGHT THINGS provides a series of nasty, occasionally poignant tales, COVEN ups the ante, going all-out in terms of action, suspense and darkness. Tommy Rawhead is a truly horrifying creature, as are the strange wooden reapers who menace Courtney in one sequence. The book moves the story forward, expanding the characters of both Courtney and Aloysius, along with several characters that played minor roles in NIGHT THINGS. There's also plenty of room for dark, absurd humor, with the climax of Aloysius's battle with Rawhead a highlight.

COVEN is perhaps a more satisfying read than NIGHT THINGS. While the first book offers a grim world where darkness was an escape, the second makes the point that the only way to overcome the problems of the real world is to face up to them.

COURTNEY CRUMRIN IN THE TWILIGHT KINGDOM, the most recent miniseries, starts with one of the title's strongest stand-alone stories, before moving into the best extended story to date. After tying up a few loose ends back in her old neighbourhood, Courtney finds herself taking some classes with other young mystics. Alas, the traits of snobbery and elitism prove just as rampant in aspiring warlocks as in aspiring moguls, and Courtney finds herself lonelier and more disgusted than ever. 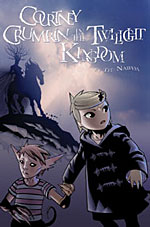 However, her classmates soon find messing with dark magic can get you into real trouble, trouble they need Courtney to help them out of. This requires Courtney and her classmates to journey into a forbidden city Courtney's been in before...and a Marshall from the Coven, convinced foul play was behind the events in the previous book, is hot on their trail, a silver-bullet revolver in hand.

The sequences in the Twilight Kingdom feature some of Naifeh's best artwork, from the cobblestone streets to the elaborate design of the Twilight King, one of the series' most poignant characters. The book also offers some back story regarding the origins of Hillsborough and the Coven, and a thoughtful look at the relationship between humans and Night Things. Then there are some of the series' scariest moments, particularly a panel showing the effects of a spell gone wrong that gave me some really, really freaky dreams.

Creator Ted Naifeh has one of the more eclectic resumes in comics. After doing various comic and video game projects for a decade (including an aborted adaptation of Gene Wolfe's THE SHADOW OF THE TORTURER for Innovation Comics), he gained a loyal following as the artist for Serena Valentino's GLOOMCOOKIE at Slave Labor Graphics, before going solo with the first Crumrin series. He's also producing radically different work in other genres, such as NBM's HOW LOATHSOME, a dark tale of sexual identity, and the upcoming video game tie-in DEATH JR at Image.

With the Crumrin books, Naifeh is able to get away with a number of artistic and storytelling risks that many other creators can't pull off. Each issue is packed with a greater number of story pages than the average comic (around 30), but also packs in a lot of story. A number of moments in each book rely on Courtney's or Aloysius's subtle reactions to another character or event, but Naifeh pulls it off.

Naifeh's characters have a cartoony, almost Tim Burton-esque quality to their designs, reducing the hard edges of some of the darker moments (it's hard to feel completely sorry for someone who gets gobbled up when he has Little Orphan Annie eyes), but emphasising the terror nonetheless. The use of black and white artwork is also an invaluable part of the story, with Naifeh's use of light and shadow easily evoking the cold, oppressive world of Hillsborough.

The three volumes of COURTNEY CRUMRIN are some of the best and darkest fantasy on the market. It's a great all-ages book, with the edge of darkness that makes for a really satisfying children's story. For those who miss the mixture of mirth and menace that Roald Dahl used to provide, look no further than the twisted woods of Hillsborough. Courtney Crumrin is the sort of girl who can handle evil giants, children-cursing witches, and nasty teachers...and she wouldn't le Veruca Salt get away with anything.