Matthew Craig joins the Comment team with his reflections on the latest comics news, including the passing of Will Eisner, the ALL-STAR BATMAN team, and Hollywood's declaration of independence.
10 January 2005 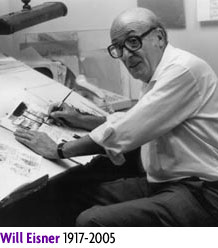 I never got to meet him, I only ever saw him speak on video (in the excellent documentary Comic Book Confidential), and I only own a couple of his books.

But the man's influence is everywhere, from the obvious - in homage such as Moore and Veitch's Greyshirt - to the integral, as with the modern graphic novel, which Eisner pioneered. So it's hard not to feel a certain sense of loss at this time.

The Eisner stories I have in my library are simple, honest tales of everyday, ordinary people, doing everyday, ordinary things. In a medium so often dominated by insane, paper-thin characters frolicking in a sea of piss-poor motivation, the work Eisner leaves behind becomes all the more precious.

COMICS GET THE (BRAD) BIRD

With the success of THE INCREDIBLES, Hollywood has apparently proved that it no longer needs to pay comic book creators (and licensors) huge wedges of cash for an established 'intellectual property'. Not when it can create original properties and rake in 100% of the profits - and, in the case of THE INCREDIBLES, receive prestigious awards nominations along the way.

Presumably, Hollywood was also inspired by the success of original TV superheroes such as THE POWERPUFF GIRLS and BUFFY THE VAMPIRE SLAYER. Nobody ever said that Hollywood was run by fast learners...

This all probably came as something of a surprise to media moguls like Avi Arad, who must now be tearing his hair out over the loss of a potential HARDCASE AND THE HARRIERS franchise. But the situation isn't as dire as it sounds.

While it's probably true that, when you get past the few truly global superhero names (in other words, anything that has been on the television long enough to get into syndication) the brand recognition factor plummets fast and hard, it's also true that the brand recognition factor of an original property is next to nothing as well. And at least WEREWOLF BY NIGHT has that little bit of "From the People Who Brought You Elektra" cachet. At least for the next week or so.

And while it is true, strictly speaking, that Hollywood can and indeed is creating superhero movies without paying for the privilege, they are having to use archetypes instead: filing the serial numbers off familiar concepts to give us such premises as 'The Super Hero Family', 'The Super Hero School', 'The Super Hero Schmuck', and so on. This, too, has been going on in other media for decades (e.g.: the Supreme/Majestic/Apollo/Hyperion/Samaritan variations on the Superman archetype). 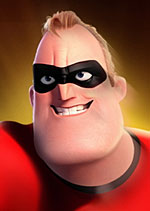 There is undoubtedly a law of diminishing returns that governs such things, as with any artistic and/or commercial trend - how much can you squeeze out of the notion that Fabman probably can't "do the do" with Leona Lancaster? But if the box office receipts for THE INCREDIBLES are any indication, there's life in the genre yet - despite all evidence to the contrary (CATWOMAN, CONSTANTEEN, David Zucker's spoof movie SUPERHERO).

Of course, there's no suggestion that this rejection will have any effect on movies adapted from non-super comic books. Hollywood is always hungry for quirky and interesting stories of all kinds, and it's hard to imagine the producers of GHOST WORLD or SIN CITY declining the projects today simply because they feel they could do better (or cheaper) with an original screenplay. As people become more accustomed to these sorts of comic book movies - whether they achieve cult or blockbuster status - the more irrelevant their source will become.

In that respect, and despite Hollywood's trademark bluster, it seems as if Comics - including superheroes - still have a potentially lucrative future in Tinseltown. So don't burn that DARKHAWK pitch just yet, Avi!

SEND IN THE CLONES

Of course, it might not necessarily be such a bad thing if Hollywood was to withdraw that golden teat. The accusation has long been levelled at Marvel and DC (as well as others) that they are only publishing in order to maintain their rich intellectual property rights - Proof of Concept, if you will.

I've never quite bought into that level of cynicism, but you can see where it comes from. What would happen to Marvel Comics if they ran out of movies to sell, or if they ended up with a high-profile clunker, such as SPIDER-MAN 4: MAXIMUM CLONAGE? Would the moneymen cut their losses, sell Hawkeye to Oni Press, and scupper the company completely? Would they cut jobs, or move into other areas, such as videogame development (where the word "archetype" wouldn't necessarily get you out of a lawsuit)?

If they had nowhere else to go, would they put all their efforts behind the current drive back to basics? Would we see a Marvel that was truly a publisher of books and comics, and not just a part-time superhero farm?

If we're very lucky, True Believers, we might just find out...

(By the way: I know there are those of you out there who would like nothing more than to see Jake Gyllenhaal play Ben bloody Reilly. To you, I say this: get help. Help of the Brain.)

The BBC are running a series of round-robin interviews under the heading Chain Reaction. If you tune in to Radio 4 at 6.30pm on January 27th, you'll be able to listen to comedian Stewart Lee interviewing Alan Moore (who, in turn, interviews Brian Eno the following week). The shows will also be downloadable from the BBC website after broadcast. And while this is all terribly exciting, I think that the most interesting thing, from a comics viewpoint, may have already been said.

When the first interviewee, deadpan comedian Jimmy Carr, was asked how he got into comedy, he gave the most wonderful answer, and one relevant to anyone with a desire to get into comics.

He explained that it's easy to be put off by the best, or even the second best, or worse. It's easy to let yourself think that because you can't reinvent the wheel right away, there's no point having a go at all. But eventually, it's important that you realise that having a go is better than never trying. That finding your level is no bad thing.

...and nor did Frank Miller. 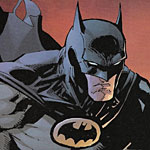 The news that Miller will be writing the new ALL-STAR BATMAN comic, with Jim Lee on art, should be enough to melt the heart of even the snootiest of highbrow comics elitists. Of course, Miller's last Batman story, DK2, was met with a mixed critical and fan reception. I thought it was wonderful, freeform action comics with a lot of bite, but there you go.

I think it's safe to say that ALL-STAR BATMAN will be a more classic take on the character - Jim Lee describes it as feeding off Miller's Batman: Year One, after all - but more to the point, it seems as if DC has finally managed to hit upon a formula designed to reenergize interest in its oldest stalwarts.

With new Batman and Superman movies just around the corner, it's about bloody time.